“If social networks have given you the stage on which to perform your life, the new Skype gives you the additional equivalent of the local coffeehouse or corner pub, where you meet people on a daily basis to deepen your relationships,” explains Amritansh Raghav, Corporate Vice President of Skype, about the new design’s focus on enhancing users’ real social connections. “We call that set of interactions your personal network,” he says.

The tech world is out of ideas, just aping what the other guys are doing.

How a Money-Losing Snap Could Be Worth So Much:

By the end of 2016, Snapchat had 158 million daily active users. By comparison, Instagram, probably the closest comparison and a formidable competitor to Snapchat, had about 30 million users when Facebook bought it in 2012 for what was then considered an eye-popping price of $1 billion.

(Facebook had earlier tried to buy Snapchat for $3 billion, which its founders rejected — wisely, it now appears.)

And $1 billion now looks like a bargain compared to what investors are paying for Snap. At $34 billion, each of Snap’s daily active users is worth $215, six and a half times per user what Facebook paid for Instagram.

As of January, Instagram reported 300 million daily active users. At $215 each, the Instagram app alone would be valued today at $64.5 billion.

These are static numbers, and what Snap is selling investors is growth. According to Snap’s prospectus, Snapchat user growth was 48 percent in 2016, about the same as the year before. If it can pull that off again next year, it would reach an impressive 234 million users, though still short of Instagram.

The Snapchat story “is all about growth,” Mr. Nathanson said. “It’s not about economics.”

I installed Snapchat maybe 2 years ago and tried using it. It didn’t work out and that’s ok. I’m not in the target demographic. I’m almost 40 and few of my friends use it.

Can Snap grow? Who knows. 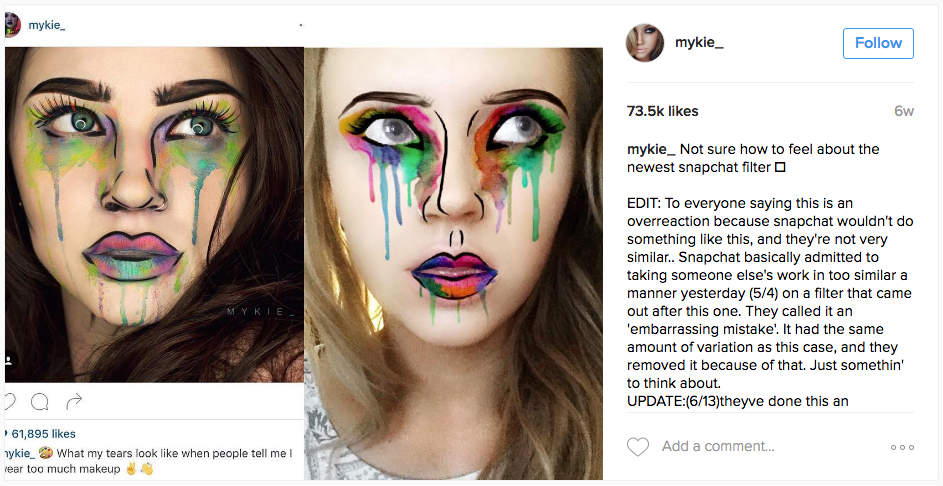 Everything is a Remix