The Flash 9 player is not rendering the body copy on my site in the crisp, ‘anti-alias for readability’ setting. My site was published in Flash 8 so it could take advantage of this new text rendering feature. Before I upgraded to Flash 9, the Flash 8 plug-in was rendering my text perfectly. Now it was looking like this: 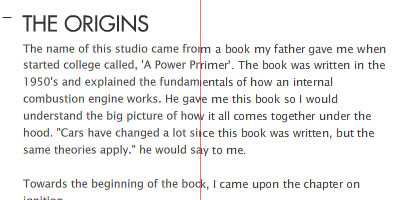 When I first saw the fuzzy text on my site I thought I was imagining it. I thought to myself, “Had I reverted to an old Flash 7 version of my site?”. Nope, it was definitely published as 8. So I checked to make sure I had the most recent plug-in installed (I had to have installed it, or the SWFObject detection on my site would have blocked me). Sure enough, I had Flash 9 installed: 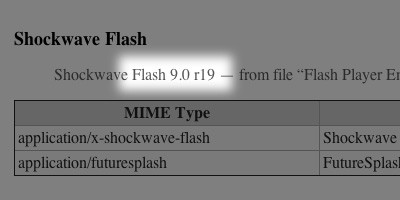 So what was the damn issue? As a seasoned professional at troubleshooting the quirks in Flash, I decided it was time to get to the bottom of this. First step – removing the 3 Flash plug-in files from my Internet Plug-ins folder:

Now that those sickly files were gone, it was time to re-install the Flash 9 player.
This is where things get more confusing.
I then went to Adobe.com to download the Flash 9 player and am presented with 2 options: 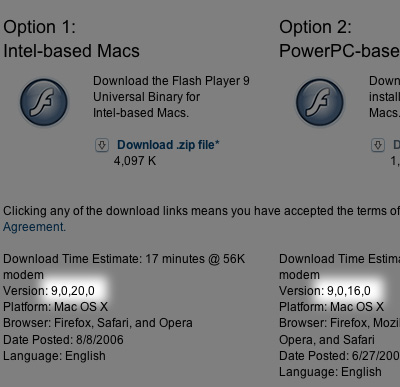 Now, I have a PowerPC G4, so I would opt for the second download, but what struct me was that the player version was 9,0,16,0 …. ? According to Safari I had just deleted version 9,0,19,0 from my machine. What the hell was going on?! How could I have had a newer version than what Adobe had posted?
Regardless, I kept forging ahead and installed the new-older Flash 9 player. I then restarted my browser and sure enough, the body copy on my site was crisp again: 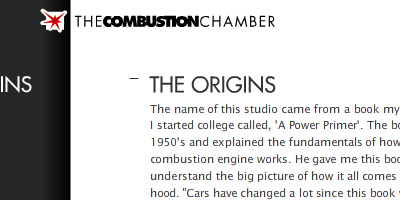 I’m happy that I have my computer displaying Flash correctly again, but I’m worried about how many other people are effected with this same problem. Is it just a Mac issue or are Windows machines effected as well?
I think its time I let Adobe know about this – although they should already know.