Based on my Mint statistics from yesterday, my site was down for about 6 hours. Other people I know on Dreamhost accounts were not effected, but I was, and so were all my clients. Not too cool. This has been a rough year with Dreamhost, since last summer’s black out in LA which brought Dreamhost down for at least a week. 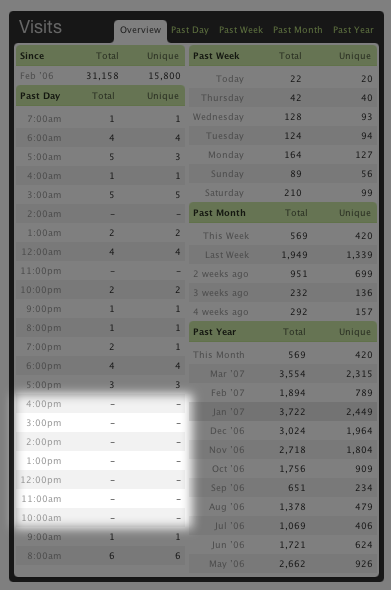 Given all the databases and customizations I have set up with my clients on Dreamhost, and the fact that I’ve used them since 2002, I really don’t want to migrate everything to a new hosting environment, but my patience with them is wearing thin.
Dreamhost has never had a problem admitting when they’ve f-cked up, and they have credited me a month’s hosting. Thanks guys, just please pull it together.