WWDC 2007 – Keynote Address (Quicktime video stream) – Like most of you, I already have all the details from the Keynote, but half the fun is watching Steve Jobs deliver the news.
Regarding Apple’s announcement that iPhone apps can be developed as web applications (sites), here are 2 different POV’s:

Joe Hewitt – AJAX on the iPhone

Hello, people! This is HUGE! I mean, when I first heard about the iPhone’s browser I assumed it would be hobbled somehow, with limited JavaScript and probably no XMLHttpRequest. The demos on Apple’s site always showed the New York Times, which is a static website if ever there was one. To hear that Apple is positioning the iPhone browser not just as a web reader, but as a platform for applications, means that the mobile web can finally start to come to life.

And this from Jon Gruber:
Daring Fireball: WWDC 2007 Keynote News

Telling developers that web apps are iPhone apps just doesn’t fly. Think about it this way: If web apps – which are only accessible over a network; which don’t get app icons in the iPhone home screen; which don’t have any local data storage – are such a great way to write software for iPhone, then why isn’t Apple using this technique for any of their own iPhone apps?

On Apple’s new site, they’ve cleaned up their navigation and IA and finally put the search box up at the top where it belongs (before it was at the very bottom). The search box starts displaying mini-results as your type. This action (or reaction) will be familiar to anyone who uses the Google search box in Firefox or has a Mac and uses the built-in Spotlight or my favorite third party app, Quicksilver. 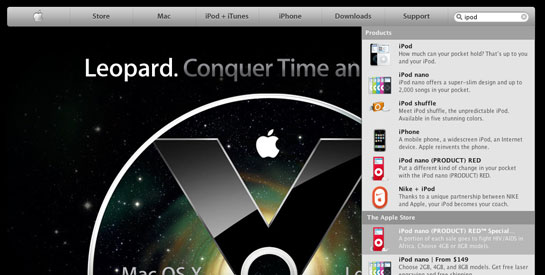 I see this search box feature being particularly helpful for newbies, people unfamiliar with the Apple site. It’s another example of Apple bringing technology to the human level – not people having to have a computer science degree to navigate the site. There aren’t mini-results for everything on the site, just the key products and features.