Hey, after almost 5 months, Nokia MOSH is finally live to the public (we initially had the Alpha version open to a small group of testers). You can upload your own content, or collect other peoples’ and have it immediately available for your phone via the mobile version of the site (you don’t need a Nokia phone).
This site is the result of a lot of hard work by both Nokia and Schematic New York. For as much art direction and design I did, it wouldn’t be worth anything if it weren’t for all the hard backend and client-side development from my Nokia team at Schematic. We also had great project management (thanks Eoin).
Big ups to Ian, Vinny, Wes, Maggie, Emily, Andrew, Jason, Brian, Eoin, David, JP, Del, Chris, Ben, Kevin, Karolina, Pablo and everyone else who contributed! 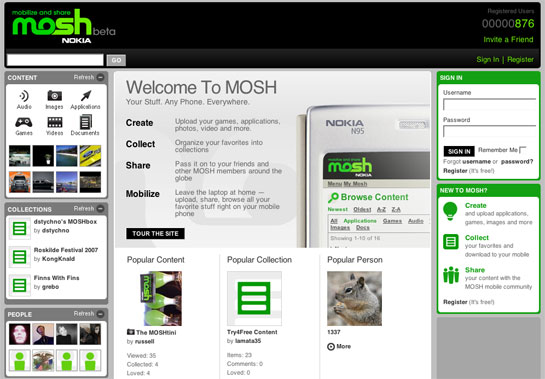