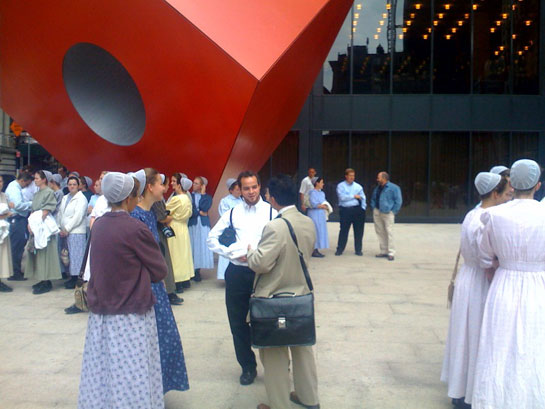 I shot the above image on my iPhone on Broadway and Liberty.
Some Amish or Quakers just chillin’ outside the Helmsley Buiding.
Yeah, I know. WTF?
I thought the same thing.
It’s just a itty bit of the craziness that was downtown Manhattan yesterday. Along with the loitering colonial folk (I’m sure they’re good people), were a ton of other oogling tourists and wanderers wasting time and space and making my life a pain in the ass as someone trying to earn a living.
I was there on 9-11-01 people, so I’m allowed to say this: Stay home. Be productive. Contribute in other ways than trying to capture photos and ‘be part of something’.
Us New Yorkers just want to keep moving on. We’re all paying our respects on this anniversary in our own ways.
Being idle observers causing the cops to corral the streets like they were ranchers herding cattle doesn’t help anyone.
M’kay?
Cool. Now beat it.