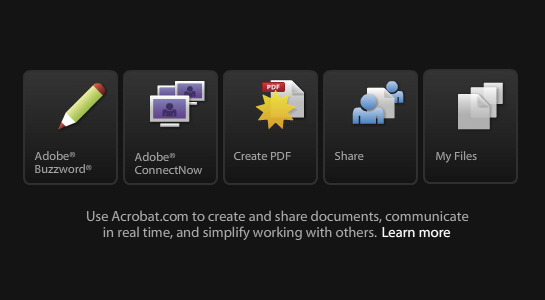 So Adobe has (officially) launched Acrobat.com. I’ve been playing with this service since last year and I love it (I actually posted about BuzzWord back in November 2007), but now they’re offering business subscriptions and it’s officially out of beta.
I’m going to avoid the hyperbole that’s all over the web right now. I won’t entertain questions like ‘Will Acrobat.com bitch-slap Google Docs and Microsoft Office?’.
What I’d like to focus on is the quality of services offered and their attention focus on design.
BuzzWord, ConnectNow, and the rest of the suite are all offered as online Flash (Flex) applications. While a pixel-perfect GUI, smooth interactions and tight engineering aren’t guaranteed with Flash applications, they are certainly possible and Adobe has achieved all of these.
While I don’t consider Adobe a ‘design’ company, I definitely see a distinct difference between Adobe and Google.
It’s the same difference I see between Apple’s iPhone operating system and software and it’s competition – Google Android – there’s a level of sophistication and design that just isn’t present in Google Docs or Google Android.
I wouldn’t quite put Google in the same category as Microsoft, but there’s no question that they’re both engineer-driven, not designer-driven. Earlier this year, we heard from the former Visual Design Lead at Google, Doug Bowman, on what’s it’s like to be a designer inside Google:

When a company is filled with engineers, it turns to engineering to solve problems. Reduce each decision to a simple logic problem. Remove all subjectivity and just look at the data. Data in your favor? Ok, launch it. Data shows negative effects? Back to the drawing board. And that data eventually becomes a crutch for every decision, paralyzing the company and preventing it from making any daring design decisions.

Now I’m sure Adobe is filled with hundreds of engineers as well, but it’s clear from the execution of Acrobat.om that there’s much more of a designer-engineer balance.
As there should be.