How real actors do it 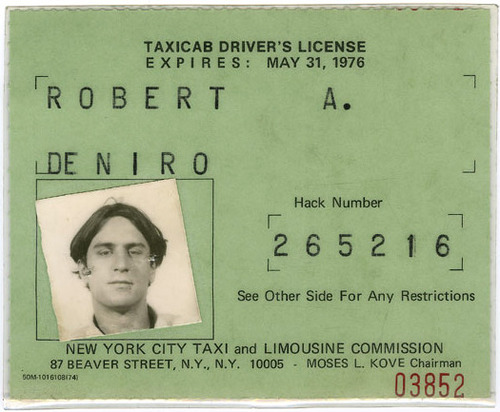 I came across this photo at one of the many Tumblr photo blogs I now follow, big fun.
It reminded me of something i vaguely remember hearing/reading about Deniro actually driving a cab around NYC in preparation for Martin Scorsese’s Taxi Driver.
From Wikipedia:

While preparing for his role as Travis Bickle, Robert De Niro was filming Bernardo Bertolucci’s 1900. According to Peter Boyle, he would “finish shooting on a Friday in Rome…get on a plane from Italy, fly to New York”, whereupon he got himself a cab driver’s license. He would then go to a garage, pick up a real cab and drive around New York, returning it before he had to depart for Rome again.[2] Robert De Niro also acknowledged that while working on Travis’s accent, on his days off from shooting 1900, he would go to an army base in Northern Italy and tape-record the accents of some of the locals there as he felt they would be good for Travis’s character.