Last week Michael Surtees wrote a post on how he organizes his iPhone home screen.
It wasn’t long after I bought my iPhone that I too started to organize my home screen based on my usage patterns. Over the last year and half my usage patterns have shifted slightly as new applications have become available but overall I’ve remained fairly consistent (see my original post from July 2008 for reference).
One of the biggest changes I made was getting rid of most of the webpage links from my home screen(s) and putting them in my bookmarks list within Safari. It used to be a novelty to have all these sparkly little webpage icons on my screen, but as I’ve acquired more and more apps, I’ve become more utilitarian and conservative with what I deem worthy of a spot on my home screen.
So In response to Surtees, I’ve mapped my iPhone space. Unlike Surtees, I organize icons in orbits, with the bottom left-hand corner being the nucleus and where my ‘clicking thumb’ sits (I write right-handed but I do a lot of things with my left hand). Similar to him though, I’m less strict with my second and third home screens. 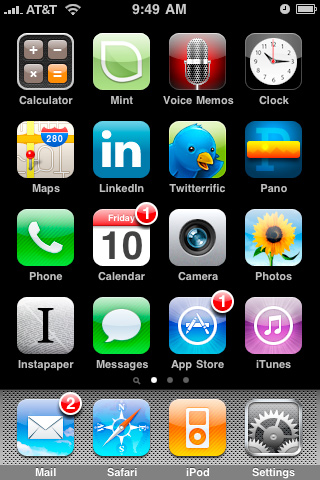 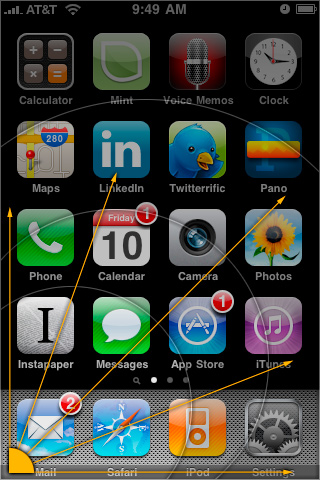