The ‘What’s Next’ mentality 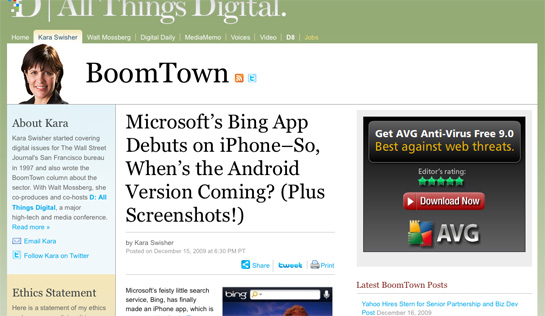 Headlines like this reveal a lot of what’s wrong with consumerism, especially consumerism in technology. I’m used to seeing them on tech blogs like Gizmodo and Engadget, but no one is immune to it, even the Wall Street Journal. “The new Canon camera has 12 megapixels, but when is the 20 megapixel version coming?” “Why is everyone still excited about the iPhone, they haven’t updated it in 3 months?” “I can’t believe they just announced a new Dell Adamo laptop, now the one I bought yesterday is obsolete.” (here’s a tip, jerkoff – the laptop isn’t obsolete, your brain is) “Product X has an automatic Jell-O dispenser, when is Product Y going to have an automatic Jell-O dispenser?”

I’m not suggesting we not strive for progress and improvement in technology. That’s not what this is is about. This is about asking for improvement in the absence of a reason. Megapixels for the sake of megapixels. Speed for the sake of speed. Features for the sake of features. When a product is designed, the goal should always — yes always — be to solve a problem. If I point to a feature on your product and ask why it’s there, and your only answer is “because we could”, you have failed as a designer. Now the fact that you’ve added said unnecessary feature does not mean the product will fail, or the feature is useless. It just means you’ve wasted time solving a problem that doesn’t exist. You’ve added an ornament. Polished the bumper. Put on some lipstick.

So when I see Kara Swisher announce that the Bing app is available on the iPhone, but wonder where the Android version is, I said to myself, slow down girl, take some Ritalin. Let’s not waste internet space with unnecessary HTML, but you have two articles in your title, let’s stay on topic shall we? As far as the second question, ‘where’s the Android version’, she’s asking the wrong question.

The question isn’t where, it’s why. Why hasn’t Microsoft launched a Bing app for Google’s mobile operating system, Android? Perhaps because Apple’s App Store has 100,000 apps and has much more exposure and profitability than Android’s 20,000 app Market? Perhaps it’s easier to develop a better working application for the iPhone platform, than the increasingly splintered Android platform and less refined SDK? In addition to rephrasing the question to make more sense, this also gets back to the ‘feature-matching’ that tech blogs and news outlets love to indulge in.

The irony is that if competing products had the exact same features and the exact same Human Experience and design, they wouldn’t really be competitors because we’d be talking about one product duplicating another in which case we might as well be talking about just one product. UPDATE: I need give credit where it’s due. I remembered where I got the idea for ‘needing reasons for everything in your design’. It comes from a beautifully concise post by Jack Moffett.