being innovative means being profitable

Adam Richardson over at frog design wrote a post last week, Microsoft Finds its Innovation Mojo.
He argues that the new crop of products that are either out or being put out by Microsoft are proof that ‘they’re back in the game’.
Richardson writes:

They have been able, to an extent, to systemetize an approach to innovation that began (it seems) with the Xbox team. The Xbox, especially the 360, established a fresh, distinctive approach to development that had been lacking at Microsoft. Innovating on behalf of customers rather than by linearly extrapolating what they say, consideration of a whole ecosystem, and then taking responsibility for the whole Human Experience in that ecosystem.

We see threads of this Xbox approach showing up in most of the new generation of products – Bing, Windows Phone 7, IE9, and Courier.

If it were true that Microsoft has found the secret formula for extra-tasty innovation mojo, then we’d be seeing very different numbers for Microsoft R&D in this chart (via
Gizmodo): 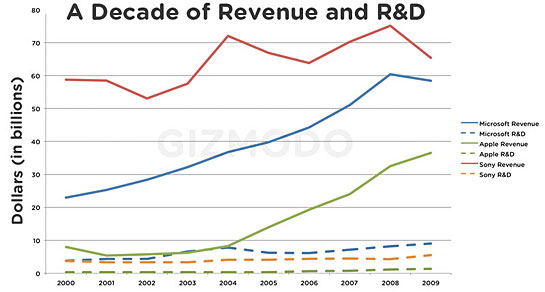 Apple spends less than 4% of their revenue on R&D and Microsoft spends about 17%, yet despite spending 4 times as much, Microsoft it’s not making MS anymore innovation than Apple.
As I’ve written before, an innovative product is one that makes money for the company who created it. Apple didn’t create the concept of the mobile application store (I was downloading Palm applications from the CNet Palm page 10 years ago), but through their Human Experience, design and SDK, they were able to innovate within that space and thus become profitable from it.
The examples Richardson gives are not innovations. WinMo7, IE9 and Courier aren’t even being sold or used yet. We don’t even know if they’ll sell well.
I’ll accept XBox 360 as an example of a commercially successful and innovative product by Microsoft, but unfortunately for Microsoft, it’s a loss leader (via BusinessInsider): 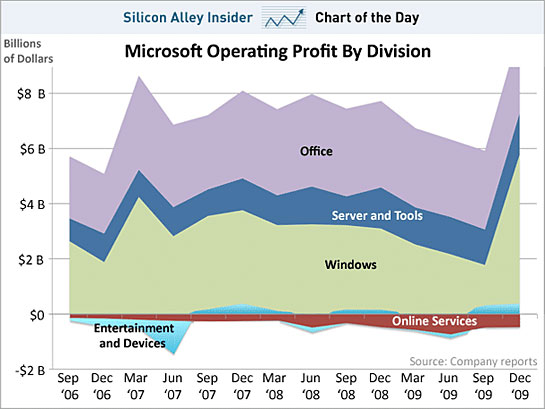 And finally, when it comes down to it, Microsoft really doesn’t understand consumer products (save for it’s XBox division). As Mark Anderson was quoted as saying in the NYTimes, “Phones are consumer items, and Microsoft doesn’t have consumer DNA”.