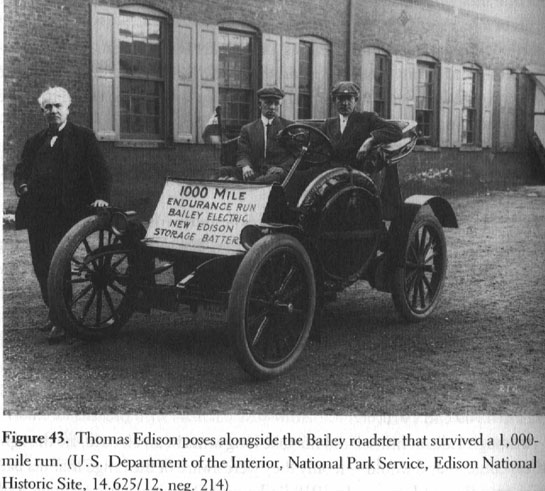 Many people think the electric car is a new development in transportation, but the picture above shows Thomas Edison next to an electric car built by S.R. Bailey & Company that he developed his nickel-iron batteries for.
The photo was taken around 1910 (New York Times article on the event).
Over one hundred years ago. Not horses. Not bicycles. Electric cars that had a range of 100 miles.
Here’s a film from 1900 showing a parade of automobiles that include steam and electric models.
With the weight of the emerging global oil economy behind it, internal combustion automobiles eventually surpassed their electric counterparts in speed, range and price in the 1910’s.
Very little is ever mentioned on how the electric car was killed off, but in his book, Internal Combustion, Ewan Black explains in detail ‘How Corporations and Governments Addicted the World to Oil and Derailed the Alternatives’.
One can imagine living in a very different world today if electric automobile and battery technology were not prematurely stopped over 100 years ago.
This was not the only time in history the electric car was prevented from making progress. In his 2006 film, Who Killed the Electric Car? writer and director Chris Paine examines the creation and subsequent destruction of the electric car in the mid 1990’s.
It’s important for people to not just be aware that something happened, but why something happened the way it did. It’s easy to dismiss electric cars in the 1910’s as not economically viable or as mature a technology as gas-powered cars, but imagine if Edison were allowed to continue his pursuit of the electric battery technology. Imagine if his Edison Plant in Orange, New Jersey didn’t mysteriously get destroyed in a fire (even though most the buildings were concrete and Edison claimed they were fire-proof).