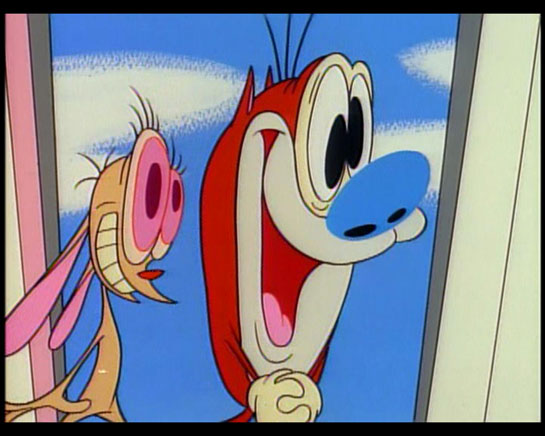 Some people might wonder what the point is in copying the drawings of others. I’ll tell you. It’s so you can apply what you learned from the copies to your own drawings. It’s not just so you can be good at copying.

I was obsessed Ren & Stimpy back in the early/mid 1990’s when I was in high school. When class projects came up, no matter the subject – physiology, English, chemistry, math – I would create big comic books narrated by Ren & Stimpy. Art and drawing were my entry point into topics I would otherwise be too bored to learn about.
At first it might sound as if I was taking the easy road by creating comic books in all my classes, and while it did come naturally to me, it was still a lot of work.
Before I started a sketchbook, I would first draft up the story I wanted to tell in my comic book. From there I would determine which character I wanted to say what, and what expression/pose they would be making when they delivered those lines.
I transferred these characters in the comic books was by first recording all the episodes and then playing them back on my VCR (yes, I said VCR) and pausing it at the moment Ren or Stimpy made a unique, hilarious expression so that I could draw the image in my sketchbook. If you’ve ever watched the show, you know these moments happened every other second.
(My father would yell at me when he caught me doing this because he said it ruined the tape heads on the VCR. He’s and an engineer and that’s a story for another time.)

Back to John K’s quote. Copying is crucial to learning. Whether you’re copying someone’s cartoon characters, CSS files, poster design, acting or music you eventually reach a point of departure. I believe it was Picasso who said that that point of departure, that screw-up in what you copied – that is your voice.
Since my goal was never to become a cartoonist, i never moved beyond copying Ren & Stimpy off of the television, but copying has played a big part in my work as a designer. Whether it’s been code, or style or methodology the first step for any artist or designer is copying.
Once you’ve full absorbed and become one with the subject it’s a natural progression to alter it and make it your own.