Design is Systems, Not Things

When you buy a house, you’re not just buying a thing with a roof, your moving into a community and if you’re smart, you take everything into account – schools, environmental aesthetics, people, distance from your job, price, safety, activities. The same can be said for people who use iTunes.
They’re not just buying media files, they’re investing in an ecosystem which is more than the sum of its parts. It’s not just the MP3 files they bought. Whether conscious or subconscious everything is factored in: ‘distance’ to my iPod/iPhone, user interface aesthetics, accessibility, features, prices, educational content (iTune U podcasts).
The lack of an ecosystem is why Amazon isn’t denting iTunes dominance.
From the Wall Street Journal:

Despite its cut-throat pricing, Amazon has made little headway against Apple, which closely ties its iTunes software to its iPods and other gadgets. Amazon heavily markets its Kindle e-reader with TV commercials, but its MP3 store has a lower profile–the company markets it, largely, through emails to customers and a Twitter account where it highlights deals.

Deep discounts aren’t worthless, but they mean significantly less when your products are scattered like buckshot in a forest. Sure, there’s a slight premium for media in the iTunes store, but it’s all there, well organized and look on in the lefthand column, there’s my iPhone, connected and read to accept not just music but all media including movie purchasing and renting.
Like anything, it’s about a million little things that add up to a lot, just compare the interfaces:
iTunes: 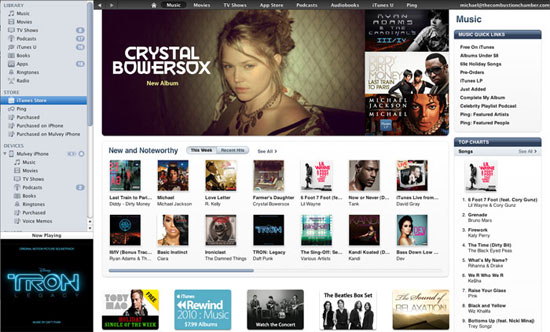 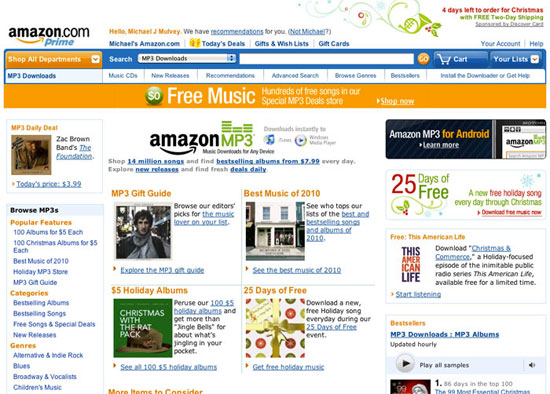 Once you purchase your music from Amazon you need to use the Amazon MP3 Downloader to download your tracks. Once they’re on your hard drive you have to then import them into iTunes or whatever media manager you use.
Not rocket science, but convoluted and confusing to the non-geeks.
AmazonMP3 is not a great community, so people don’t want to move it.