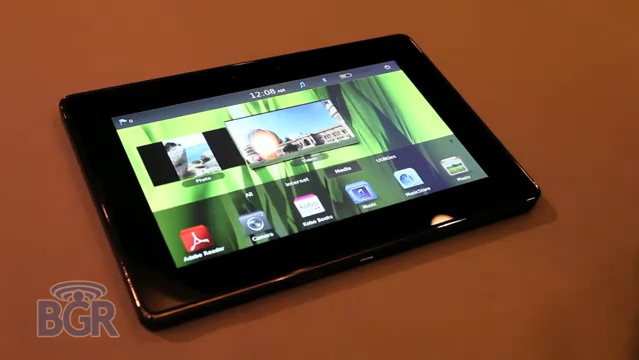 Boy Genius Report posted a hands-on video demo of the RIM PlayBook, their new tablet prototype. I say ‘prototype’ since this thing isn’t on the market yet and is still very much half-baked.
The PlayBook looks well thought out with clear influence from both Apple’s iOS in the icon arrangement and homescreen navigation and HP’s (Palm’s) webOS in the tile/card multitasking (you even swipe-up to quit a program). Navigation is clear, transitions are smooth and production quality is tight.
What is yet to be shown is the ecosystem in which the PlayBook lives. The applications to make it more powerful. The software to transfer media easily. The integration of services – how email connects with photos, how maps connect with contacts.
And what of other devices? It would be a shame to put all this effort into the PlayBook without seeing the operating system extend to smartphones.
Steve Jobs confessed to Walt Mossberg at the D8 Conference this past June (at about the 36:30 mark) that they had originally started developing iOS for the iPad, but felt creating a multi-touch mobile phone was more important than a tablet. So they shelved the iPad and focused on the iPhone.
One would think this line of thinking would be equally, if not more important to RIM, given the jeopardy their smartphone devision is in right now with competition from Apple’s iPhone and Google’s Android.
It’s like RIM is in a car race with Apple and Google and instead of fixing their car, they’re in a hangar, creating a new airplane to compete with other airplanes.