The Home Button Is Fine

Aza Raskin recently wrote about an observation on iPhone users:

If you sit and watch people use an iPhone there’s a mistake made often and reliably: They hit the home button when they mean to just go back to the app’s main screen. Going home has heavy consequences–to recover you’ve got to find that app again, sit through its splash screen, and fiddle the app to where it was before. The home button is the grunt-and-touch control of physical affordances. While iconically simple, the one bit of information it lets you indicate is too little.

He suggests a solution:

Camera shutter buttons have a two-stop action. Half-press them to lock focus and aperture settings, fully press them to take the picture. There’s a delightful tactile indent at the half-way mark so that your fingers know what’s going on. Let’s borrow this two-stop action for the home button. Press half-way to go to the app’s main screen, all the way to go to the phone’s main screen. If you need to fully escape mash the button. If you just want to head back to the main-screen of the app, tap lightly. You can easily convert a light-press into a heavy-press mid-action. It’s as naturally a mapping as you are going to get.

A two-stop Home button is an interesting idea, but it’s not the solution. While providing an OS-level crutch to resolve an application-level usability problem can be implemented it’s not addressing the problem at it’s origin – the application.
While I’m an an interactive designer and not an average user, I would still like to go through a few anecdotal examples in order prove that no only is a two-stop Home button unnecessary but doesn’t map to every application UI flow.
First off, here are my top 5 most used 3rd party iPhone applications and games:
Instapaper
Angry Birds
Twitter
Facebook
Instagram
Few of my Top 5 applications have what I consider a true Home Screen. I define a Home screen as a screen that provides the main access point to all core functions. A view of a list of content/feed is not a Home Screen. Neither is a Splash Screen, a Splash Screen is less useful than a Home screen. In general, the levels of heirarchy within iPhone applications are so few that we rarely need a Home screen or a Main Menu.
Below are screenshots from application entry point down to subsequent sub/detail views: 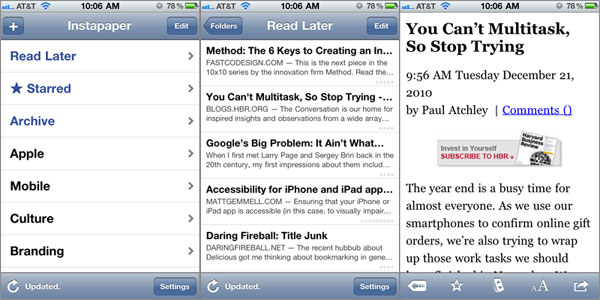 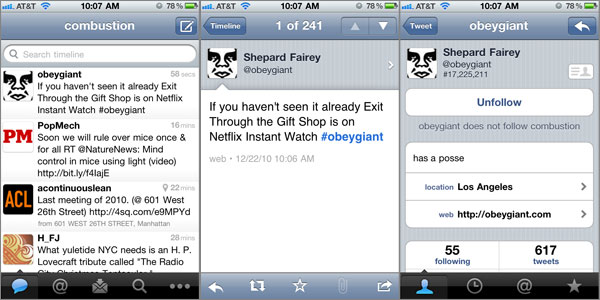 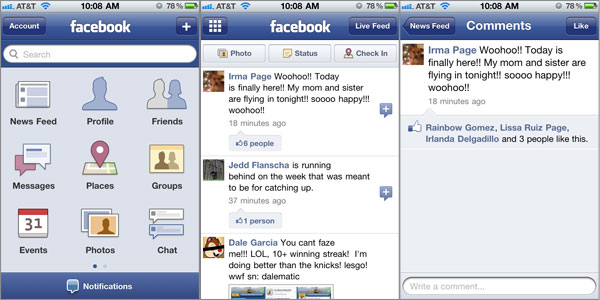 Instagram: 1) Feed View 2) Share – Step 1 3) Share – Step 3 4) Share – Final Step
Of all these applications, Facebook is the only application with a true Home Screen. It provides global access to all the core areas of Facebook. A two-stop Home button would work, but there’s a Home button staring you right in the face in the top left corner of the screen.
Instapaper and Twitter both have Main Views, not quite the same thing as Home Screens and with Instapaper, your Main View is the Read Later list. Rarely do you need to go back to the main Category Screen. So if I were implementing two-stop Home button functionality, what’s the Home Screen? I would argue on a day-to-day basis the Read Later screen is the most widely used.
The only screen Instagram has that could act as a Home Screen is the first button in the bottom Mode menu – Feed, but one could argue Popular and News could just as easy function as such. As as far as getting lost within the levels of navigation within the photo selection process – if the back buttons aren’t clear enough for you, then neither is a two-stop Home button.
As for Angry Birds, you’re either playing a level, selecting a level within a group, or choosing a level group. Outside of those 3 screens you have the Splash Screen, which is useless once you’ve set your gameplay preferences.
A two-stop Home button is an interesting idea, but not practical. For it to work optimally across all applications and games it would require developers to designate a view that could function as a Home Screen and this might be different for each developer. If users are getting lost down the rabbit hole that is your application, the solution is fixing the navigaiton in your application.
UPDATE: Looks like John Gruber agrees with me. Seems neither of us see people hitting the Home button to go home within an app:

I don’t see people doing this. The half-press on a camera shutter serves an essential purpose. Creating a “half-press to go back to the current app’s root level” iOS home button would serve a purpose, but I don’t think it’d be worth the cost in additional complexity. Plus, it create a small exception to one of the key design tenets of iOS: when you’re in an app, everything you can do in that app is done on-screen.