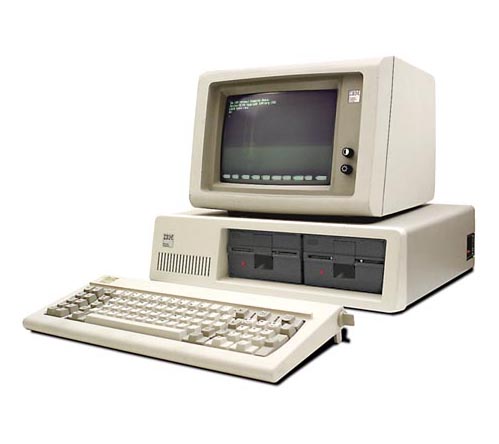 On the 12th of August, the IBM PC turned 30 (via). I remember when my father bought our family an IBM PC when it came out that year. My father told my mother and me this was the future. My mother was skeptical about the $3,000 machine.

Before you shut down the computer, you had to park the head. My father couldn’t stress this enough to me. I could ruin the hard drive if I didn’t do it. The thought of not parking the head terrified me. There was no Windows Operating System. The screen was black with green characters. Everything was performed at the command line. If you’ve ever seen DOS on the Windows machine or the Terminal on an Apple, this was the entire experience on the first IBM.

In the early days the only game my father played was Microsoft Flight Simulator. This was after he bought a CGA display. It had 16 colors. I used to always ask him to fly by the Empire State Building and between the Twin Towers. I thought the graphics were amazing. In order to play games you had to either run them off of floppy disks or install them on your hard drive. I remember having to navigate directories in DOS, trying to find “FLIGHTSIM/Install.exe”. If I ran a game off of a floppy I had to navigate to the A Drive (the internal hard drive was the C Drive).

During high school I figured out how to type in phrases in DOS through the SoundBlaster card in order to prank call my friends with the computer’s robot voice.

Typing “cd ..” navigated you up a directory from where you were. The F1 key was always “Help”.

Control-Alt-Delete rebooted the computer without needing confirmation. It was fun doing this key command on the computers in Sears at the Rockaway Mall.

The printer we got with the PC sounded like a gatling gun when it printed. It just printed text. No graphics. No colors.

These early, crude days with the first PC gave me a big head start with understanding computers and helped shape me into the designer I am today. It has informed everything I’ve done from print design to web design to iOS design. I understood not just how something should look but how it worked behind the scenes. This didn’t mean I didn’t get frustrated when computers didn’t do what I wanted them to do, but it gave me the patience to know how to troubleshoot them.

It didn’t just make me a great driver, but a good mechnic as well.