It’s time we move beyond technical specifications when deciding on a tablet to buy.
While geeks will nit pick over memory slots, removable batteries, customizable configurations and “openess”, Joe and Jane average could give a rat’s ass. MG Siegler did a great piece on The Death of the Tech Spec back in November of 2011.
The everyday consumer wants to know if it’s enjoyable and easy to use. That’s it. Technical specifications are important, but they shouldn’t lead the conversation. Regular people don’t know the difference between capacitive or resistive touch screens. What’s important is how the screen responses to their touch.
So while product reviews at The Verge are extremely thorough and well presented, they miss the point. Especially their product comparison charts — like the one they did comparing the iPad (3) with the competition.
Now, as I mentioned, there’s valuable information in their comparisons, but it’s no way for the majority of non-geeks to make a buying decision.
It’s about as helpful as having a comparison chart for some of my favorite bands (click to enlarge): 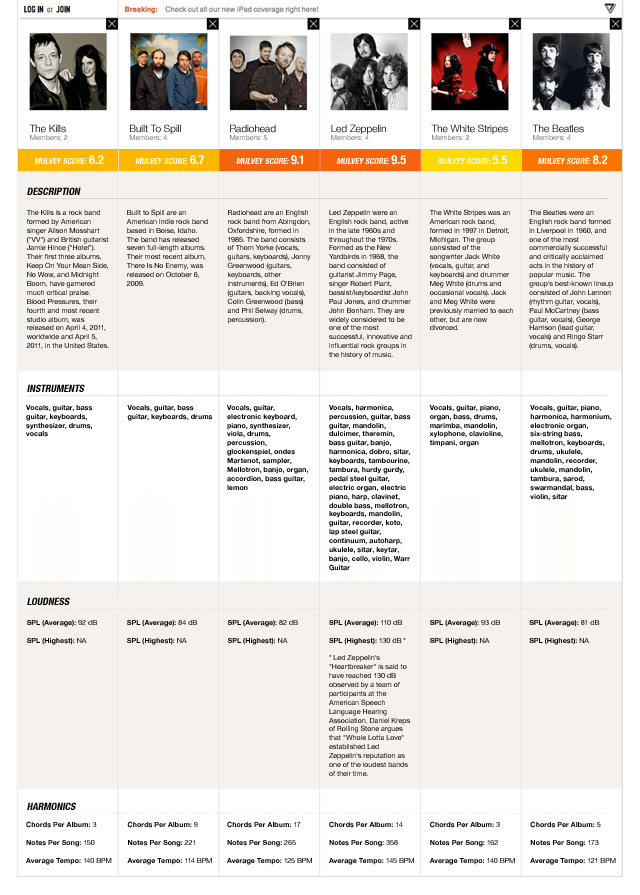 Can you tell from the chart above which band is ‘the best’?
Does how loud a band is in concert help you decide whether to get their newest album?
Does how many chords they use per song tell you anything about great they are at composing music?
Docking points from tablet not having a removable battery is like docking points from a band for only having a drummer and a guitarist (like The White Stripes). Or giving more points to a band because their guitarist uses a bow to play their guitar (actually Page does get extra points for that).
The 1980’s and 1990’s were part of the Windows Era and during the Windows Era consumers did not choose their operating systems for two reasons. First, Microsoft had a monopoly on personal computers. Second, even even when there were options outside of using Windows, IT departments made the buying decisions, and usually choosing Windows made their lives easier even if the other options they had to choose from were designed better (although it’s likely there weren’t any other options to choose from).
Since the iPhone launched in 2007, the flow of influence continues to reverse more and more, putting consumers in control of what gets adopted in the workplace. Tell me many how many high profile executives you can now spot, dicking around on iPads during meetings? I’ve worked with some Fortune 500 companies and I’ve seen a lot. I’ve also seeing a lot of iPads in business class on planes (and just as many in couch, for that matter). It’s awesome because IT can’t tell the CEO of your company his iPad isn’t supported on their network. Fuck you, guy. It is now.
For the first time in their lives, regular people are realizing you can have fun using a personal computer. No Windows Explorer, no force-quits, no CRTL-ALT-DEL, no viruses, no security prompts. Using a computer can be fluid, seamless, fun. An experience.
Like listening to one of your favorite bands.