I Changed My Mind

I decided to go ahead and install iOS 6, despite my decision a few days ago to wait (Who the hell am I kidding? I’m a huge geek and I’ve been using computers since I was 4 years old).
The reason? The more I read about mapping technology and listened to podcasts where people were discussed it, the more I realized I wouldn’t be helping the situation if I just sat out of the game.
As many people reminded me, some technologies, including mapping, can only get better when people are allowed to use it. Break it. Point out flaws in it. Mapping is one of those technologies. Google has been doing maps for 7 years (that’s 2 years before the iPhone launched). They’ve had a big head start in collecting data, improving it, adding amazing features like StreetView I’ve come to rely on. But they didn’t launch with StreetView, or transit directions or the high(er) fidelity satellite images they have today.
Now, for better or for worse, Apple has decided to build their own mapping service (At this point all we know is Apple had a 5 year licensing contract with Google for their Maps data and they didn’t renew the contract). It might not be as bare bones as Google Maps was in 2005, but it needs a lot of work.
I discovered the link in Apple’s Maps app you need to click on to ‘Report a Problem’. It’s too subtle in my opinion: 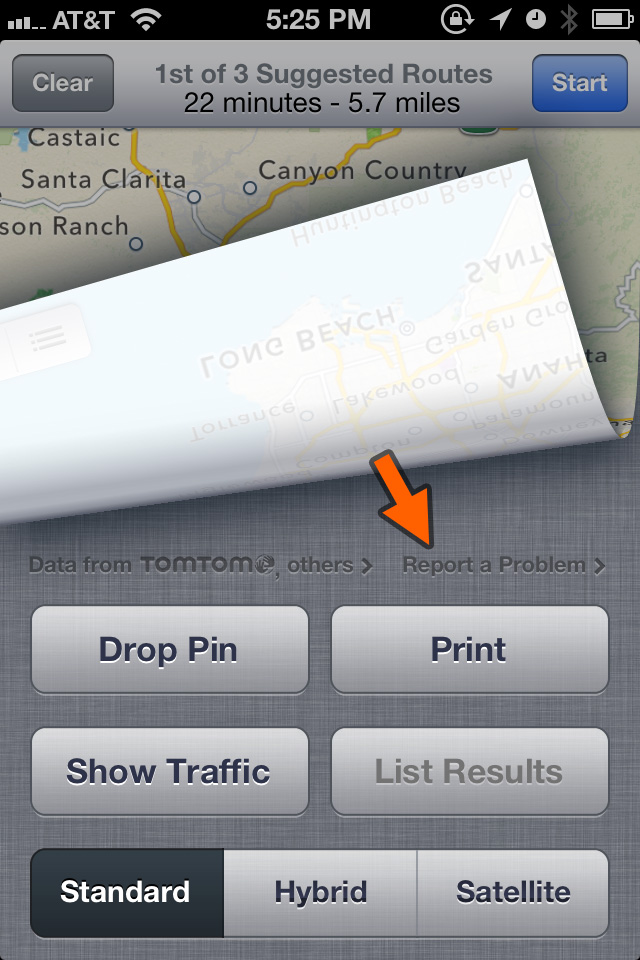 So far, from the few routes I’ve plotting between places here in Los Angeles, nothing looks wrong, but I’ll be keeping my eyes peeled.