Reputation on the Line

Over at FiveThirtyEight, statistician Nate Silver has been aggregating and analyzing polling data in order to predict the outcome of this year’s presidential election. What a person will notice from his, and other analyses done by observers trying their best to be objective, is that the race has not been as close as the media would have you believe. President Obama can lose tomorrow, but Silver’s model has the race as anything but a tossup. See this mornings predictions below: 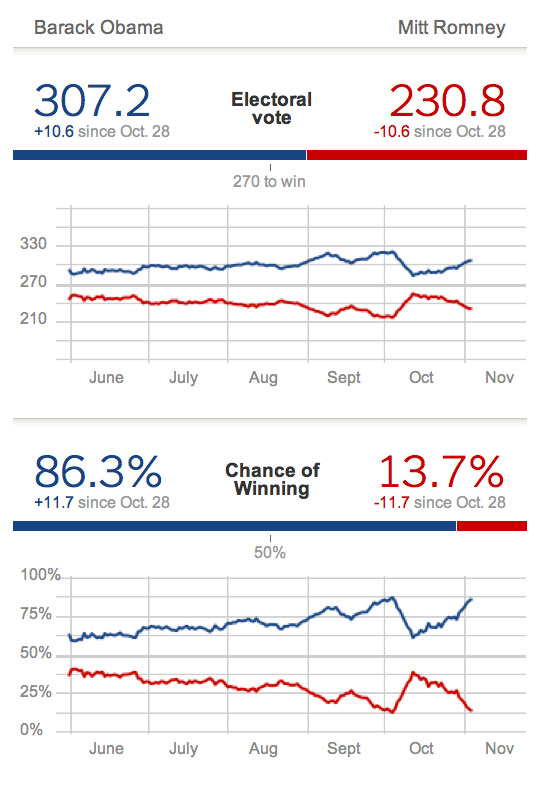 What Silver has been doing in this, and past elections, is try to get past the noise of pundits and news organizations that offer predictions without really delving into the complexity of the available data. It’s not new, but he has shown that even the best news organizations are still operating from their own self-interests, painting the race as much closer than it really is in a not-totally-concsious effort to keep the race exciting. I’m a big fan of news media, especially newspapers, having grown up in a household with both parents employed by newspapers. But while news organizations are invaluable in reporting things that have already happened, they are generally weak in their predictive capacities. To its credit, the New York Times recognized this, which is why they bought FiveThirtyEight.com and it now resides in their domain.

Silver has been catching a lot of heat over his model, which hasn’t had the president at less than a 75% of victory since June. This weekend, Silver wrote an excellent piece defending his work. From the column:

…we’ve about reached the point where if Mr. Romney wins, it can only be because the polls have been biased against him. Almost all of the chance that Mr. Romney has in the FiveThirtyEight forecast, about 16 percent to win the Electoral College, reflects this possibility.

Yes, of course: most of the arguments that the polls are necessarily biased against Mr. Romney reflect little more than wishful thinking.

Nevertheless, these arguments are potentially more intellectually coherent than the ones that propose that the leader in the race is “too close to call.” It isn’t. If the state polls are right, then Mr. Obama will win the Electoral College. If you can’t acknowledge that after a day when Mr. Obama leads 19 out of 20 swing-state polls, then you should abandon the pretense that your goal is to inform rather than entertain the public.

That’s some tough language, especially considering his employers are being more conservative in their analysis. It’s obvious that Silver believes in his predictive model, and that confidence is not unfounded, having predicted the outcome correctly in 49 of the 50 states in the 2008 election. If that election got him noticed, this election has gotten him scrutiny.

If all a person does is absorb the work of editorial writers, op-ed pieces, and bloviating cable pundits, Silver must look like he’s out of his mind. Or worse, that he’s little more than a paid operative of a biased liberal media. The only evidence of that, however, is how a reader reacts to his numbers, which is no evidence at all (in fact, the opposite argument could have been made in 2010, when Silver predicted, and was correct about, massive losses for the Democrats in the House).

Silver has a lot on the line with tomorrow’s outcome. Along with watching the returns tomorrow, I’ll be watching to see how they line up with Silver’s predictions. What I’m watching for is not so much a win for Silver, but a loss for punditry. There’s so much poison on the airwaves, in print and online masquerading as truth that getting skewered by some objective analysis is sorely needed. Well-considered opinion has a place in the public debate, but faulty predictions of outcomes based on little to no evidence and biased to a speaker’s agenda, whether it be political or monetary, needs a countervailing force. That’s what Silver provides, and why I imagine he will be quite satisfied come tomorrow night, even if Romney manages to beat the odds.