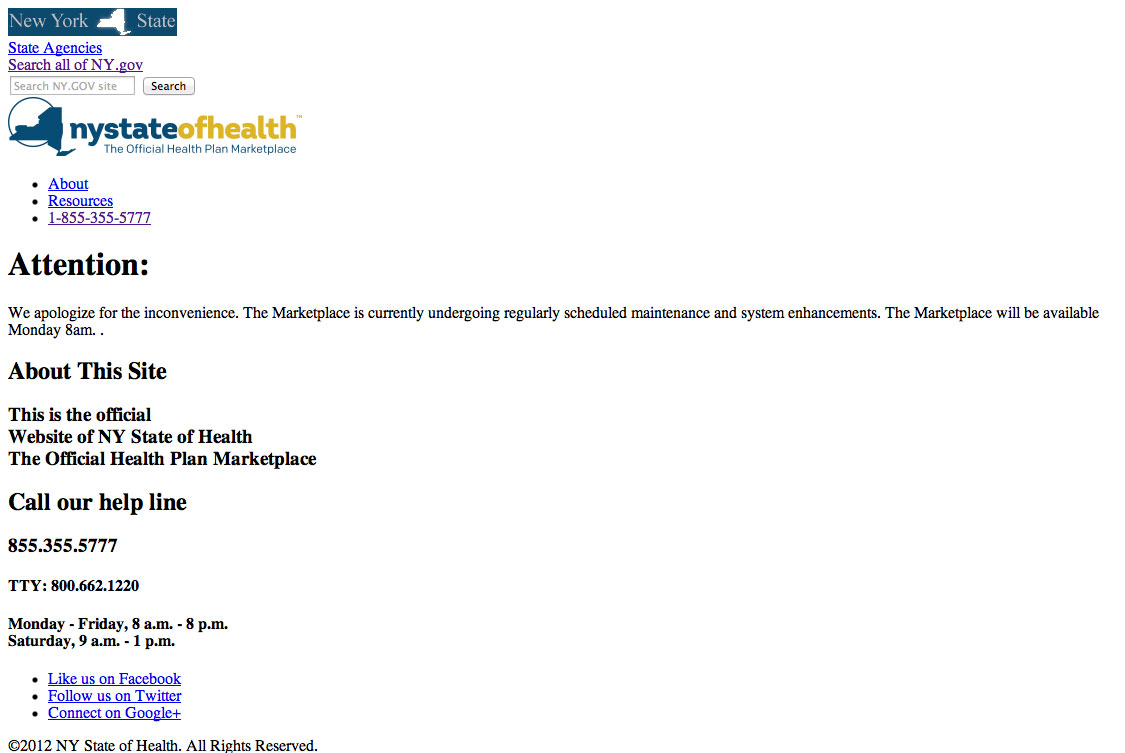 Look at that mess. This website is so broken they can’t even be bothered with loading CSS while they’re trying to fix the backend. Two weeks into the Affordable Care Act rollout and this is what New Yorkers are dealing with.
And it’s not just New Yorkers. The national website, healthcare.gov, is so broken that people are having trouble even logging in. As bad as New York’s site is, at least I was able to progress to the eligibility portion of the process before it finally shit itself completely.
Republicans in Congress and conservative pundits have been working up some effective framing about the health care rollout this past week. On this morning’s talk shows, it went something like this:
“This isn’t a glitch. The system is breaking down…repeal Obamacare.”
To be sure, the technology failures plaguing the rollout are serious and inexcusable, especially considering the government had three years to develop this program, and spent more than 400 million dollars, just for the national website. Many millions more have, of course, been spent on the twenty or so state-run sites. The technical requirements for running these exchanges is enormous, but doable. As Paul Krugman tried to point out on This Week, before he was shouted down by a wave of talking points, the exchange in the nation’s largest state, California, has been working well, auguring the fact that given time, the technical challenges will be overcome.
What is disheartening is that, even though these pundits and politicians are reading from a script, they do seem to believe that the technical problems mean the health care program is fundamentally untenable, and they couldn’t be more wrong. These are people who make their livings in the world of partisan proclamations and ideological utterances. They tend to be middle-aged, and probably began their careers hammering away on IBM Selectrics. They wouldn’t know how a webapp works from a hole in the ground. When I see Secretary of Health and Human Services Kathleen Sebelius stumble through an interview on The Daily Show, or Peggy Noonan spout her rhetoric at Krugman, I wonder why I have yet to see any of these shows bring on someone with experience building websites.
I want to see someone on these shows who has had experience with phased rollouts (something the government unwisely decided not to do). I want to see someone who has spent weeks or months whittling down a bug list. Most importantly, I want to hear from the people who saw this train wreck coming from months away. No web project this fucked up could have possibly been a surprise to the people involved. Having been on some doomed projects here and there, I can imagine the waves of feature creep and endless conference calls throughout this past spring and summer as, all of a sudden, the deadline for rollout approached.
And the reason I want to hear from these people, is because they, and only they, can give the public an accurate representation of what is happening regarding these websites. That is, they can point out that the problems are not indicative of an unworkable law. Rather, they are indicative of complex challengess that are technical in nature. And technical problems are eminently solvable. The fact that some states do have working exchanges shows that time and effort will resolve the issues plaguing the systems.
So, I have confidence that the insurance exchanges will be up and running. Critically for me, and millions of other Americans, is that the sites be fixed before the technological illiterates that run the government pull the plug. This is it. This is the only way I, and so many others, will be able to find affordable coverage. We need this more than most people can imagine. We’re not going to see the Medicare rolls expanded into universal coverage. We’re in a health care limbo whose costs in both lives and dollars is too high. The Affordable Care Act is probably the only step we’re going to see in our lifetimes towards righting an unconscionable wrong in this country. I, for one, am willing to give the law more than thirteen days before I throw up my hands in despair and declare it time to scrap the whole thing. But the people responsible for this royal fuckup aren’t making my position any easier.