I have problems using the music player app in iOS 7. The specific problem is when I (try to) click on the Next button to advance the track. Sometimes I hit the Next button and sometimes I hit the volume scrubber, turning the volume up full blast. This hurts my ears and it’s annoying. This is an example of where Apple is ignoring Fitts’ Law. First off, what the hell is Fitts’ Law? Shame on you for not knowing:

Fitts’ law is a model of human movement primarily used in human-computer interaction and ergonomics that predicts that the time required to rapidly move to a target area is a function of the distance to the target and the size of the target. Fitts’s law is used to model the act of pointing, either by physically touching an object with a hand or finger, or virtually, by pointing to an object on a computer monitor using a pointing device. It was proposed by Paul Fitts in 1954.

Let’s look back at the controls for the music player app in iOS 6:

Now, the controls are harder to use: 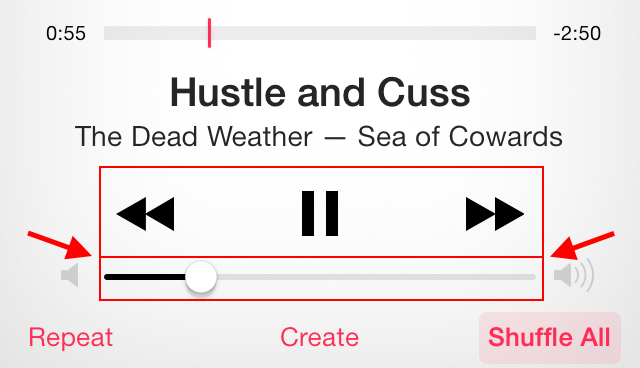 If you don’t use the music player in iOS 7 much, the image above might look fine, but try using it. Now, when I try to advance to the next track, I have to look closely at where I’m tapping. More often than not, I tap too close to the volume scrubber and the volume jumps up to 8 or 9.

In Apple’s iOS Human Interface Guidelines, they advise giving, “tappable controls a hit target of about 44 x 44 points.” In IOS 7, the volume scrubber is only around 22 points high, well below Apple’s recommended hit target size.

An easy fix would be to hide the time lapse scrubber as it was in iOS 6 and making it viewable when you tap on the album artwork. This way, the Previous/Play/Pause/Next controls could move up and away from the volume scrubber and the volume scrubber could be given bigger hit area like it had in iOS 6.

Try this: In a straight line from the Play/Pause button to the Next button, make a series of tiny taps and watch the volume scrubber jump around. What’s going on?!