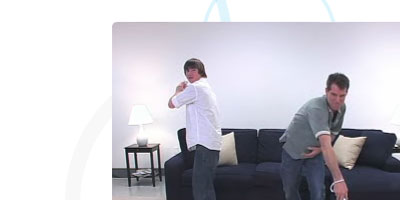 The people at Sony and Microsoft have to be a little envious of the interactive controls on the Nintendo Wii. The graphics on the Wii aren’t nearly as detailed as that on the PS3 and XBox 360, but just take a look at these videos and tell me it doesn’t look fun as hell:
http://us.wii.com/
I really like the Wii site too. Very clean and organized.