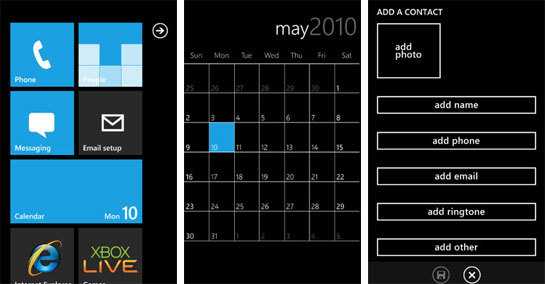 So last week, Paul Thurrott posted ‘near-final’ screenshots of Windows Phone 7.
I have the same opinion now, as I did last month when I posted and reacted to Edward Tufte’s thoughts on the mobile interface design.
They’re still just wireframes.
Jack Moffett astutely observed, “There isn’t enough variation between what is tappable and what isn’t.”
Just to be clear, this isn’t me wanting or expecting the WP7 interface to be shiny and polished like iPhone interface. There’s many ways to design a GUI, and these just don’t look designed. At all.
It’s impossible to ignore what you’ve seen from your competition, but I’m hoping that the Windows Phone 7 team didn’t deliberately rage against the machine and decide to reject all implied dimensionality within the WP7 interface. If you want things to look clickable, you need to make them look, um, clickable. This doesn’t mean you need to use bevels, gradients, reflections and gloss. A lot can be achieved using just one of those effects.
A minimalist interface would be amazing, but WP7 isn’t minimalist, it’s empty.
Which brings me to my next point about WP7. In an interview with Steve Jobs back in the 80’s, he comments that “… they [Microsoft] don’t think of original ideas and they don’t bring much culture to their products …”
When first watched the interview, I understood what he said in theory, but it wasn’t until I saw the WP7 screens that I truly ‘got’ what Jobs was saying. The WP7 interface is completely uninspired and has a complete lack of culture.
Given WP7’s lack of real design, I was shocked at tweets from Khoi Vinh and AisleOne: 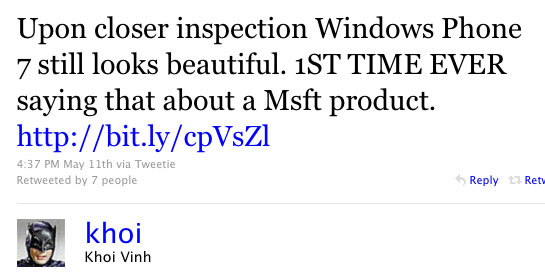 I’m waiting for another company to give Apple some real competition to the iPhone. I love Apple products, but Apple needs competition and there’s so much more room to innovate with the mobile space.
Let’s not get excited over wireframes posing as finished designs.