My Skill Not My Wallet

I recently downloaded the LucasArts iOS game, Tiny Death Star. I blame it on the double-pronged nostalgia attack of 8-bit graphics (a la the NES) and Star Wars, two integral elements of my childhood.
Tiny Death Star is a freemium game. Shit, I hate that word. Freemium means technically, superficially, it’s free, but in order to play at a reasonable pace and acquire upgrades and rewards, you have to make in-app purchases.
I can’t make a blanket statement and say I object to every app with a freemium business model. I specifically object to in-app purchases for games. My reason is simple: in a game, I expect progression based on my skill in playing, not on the size of my wallet.
In Tiny Death Star, acquiring certain properties is only possible if you buy in-app ‘bux’ and ‘credits’. The alternative is intially waiting hours and eventually waiting up to days to accumulate credits. As for bux, the only way to acquire them is to follow instructions from the (tiny) Emperor. Based on the price of certain items and the slow rate at which you’re awarded bux, it could take months and months of gameplay to make minimal progress.
Below is a screen grab of the Imperial Bux Store: 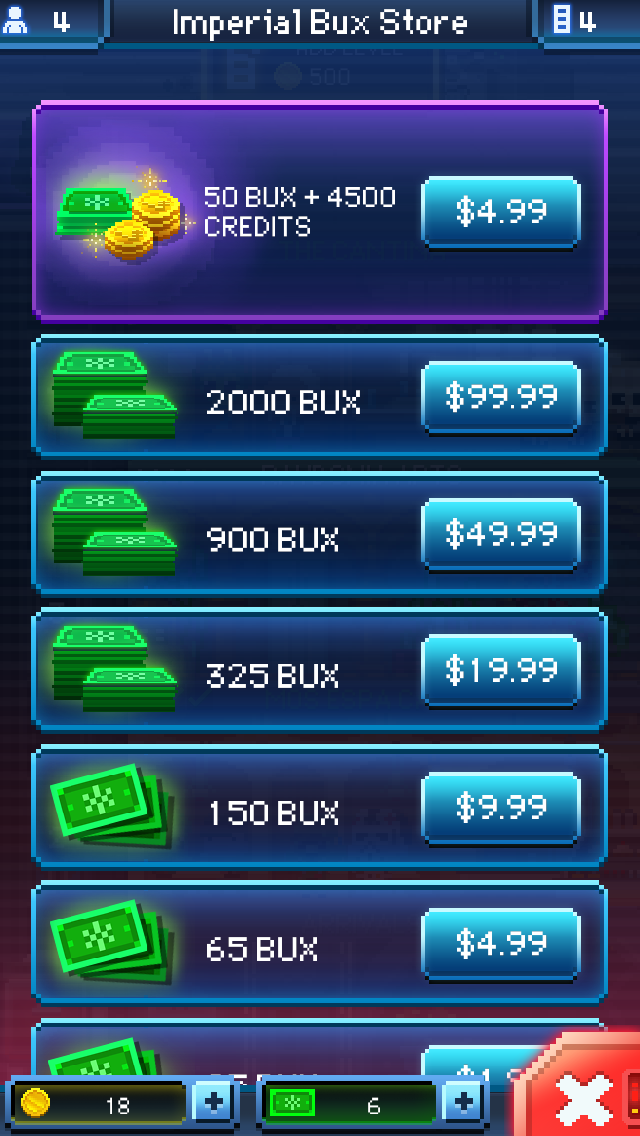 The fact that there is even the option to buy $99 worth of bux is bullshit.
This is not fun.
This is being squeezed, nickel-and-dimed, dare I say extorted, on a tiny scale (and by tiny I mean big).
I tried this game for a week but have since deleted it from my iPhone as it was clear I was getting nowhere fast. The only reason this game seems to exist is to jam more money into LucasArts’ pockets.
Count me out.