Over at The Atlantic, Taylor Lorenz informs us teenagers are using ‘flop accounts’ on Instagram to debate and distribute the news.

What the hell are flop accounts?

The accounts post photos, videos, and screenshots of articles, memes, things, and people considered a “flop,” or, essentially, a fail. A flop could be a famous YouTuber saying something racist, someone being rude or awful in person, a homophobic comment, or anything that the teen who posted it deems wrong or unacceptable. Some of the teens who run a given account know one another in real life; more likely, they met online.

The kids say these accounts are more accurate than what’s being put out by news organizations:

“A lot of news nowadays claims to be facts, but it’s based off people’s opinions or they purposefully omit information,” she said. “I wish we could trust articles more, but it’s been proven multiple times of people reporting things that aren’t true. It’s just hard to know who to trust, so you always feel the need to check things yourself. You can’t just read an article and take it as fact, because there’s always a chance that it isn’t.”

I think these Instagram accounts are fine as an outlet for kids to talk about issues with their peers, but the irony is they are exactly what they claim to be fighting against. Ah to be young and ignorant.

The teenage admins of these flophouses need to truly understand how journalism works and how companies like The Washington Post and The New York Times operate.

Being the crusty old-media scold felt good at the time, but recent events suggest that Vice is deadly serious about doing real news that people, yes, even young people, will actually watch. And given that Vice has been in talks with Time Warner for a partnership that may include its bringing its guerrilla aesthetic to an entire news channel, it’s worth looking at its growth and development as a source of hard news.

Last year, Vice gained a share of infamy by getting access to the North Korean leader Kim Jong-un and the notoriously secretive country he leads through a caper involving Dennis Rodman and the Harlem Globetrotters, a stunt that drew attention, invective and clicks. In March, Vice christened Vice News as a separate entity and joined with YouTube on a news channel. Almost immediately, the Vice reporter Simon Ostrovsky began filing remarkable dispatches from Ukraine and was, for his trouble, kidnapped in April. (He was freed after a few days.)
—David Carr, Its Edge Intact, Vice Is Chasing Hard News 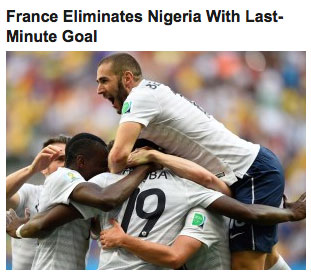 Umm, no. The score was 2-0. Huffpost showing, once again, that being first with a story does not always mean being the best. Slow down. Chew your food.