The way she describes bubbles is quiet poetic:

“Bubbles are emptiness, non-liquid, a tiny cloud shielding a mathematical singularity,” he wrote. “Born from chance, a violent and brief life ending in the union with the nearly infinite.”

And this nugget caught my eye:

A soap bubble is the physical world’s solution for a mathematical challenge: to minimize a surface area — in this case, one that surrounds a prescribed volume of air. Nature is always seeking to optimize, to maximize gain at minimal cost in energy cost.

Nature Crawls Up It’s Own Ass

The drinking of tears is called lachryphagy, as shown in this photo of butterflies drinking turtle tears: 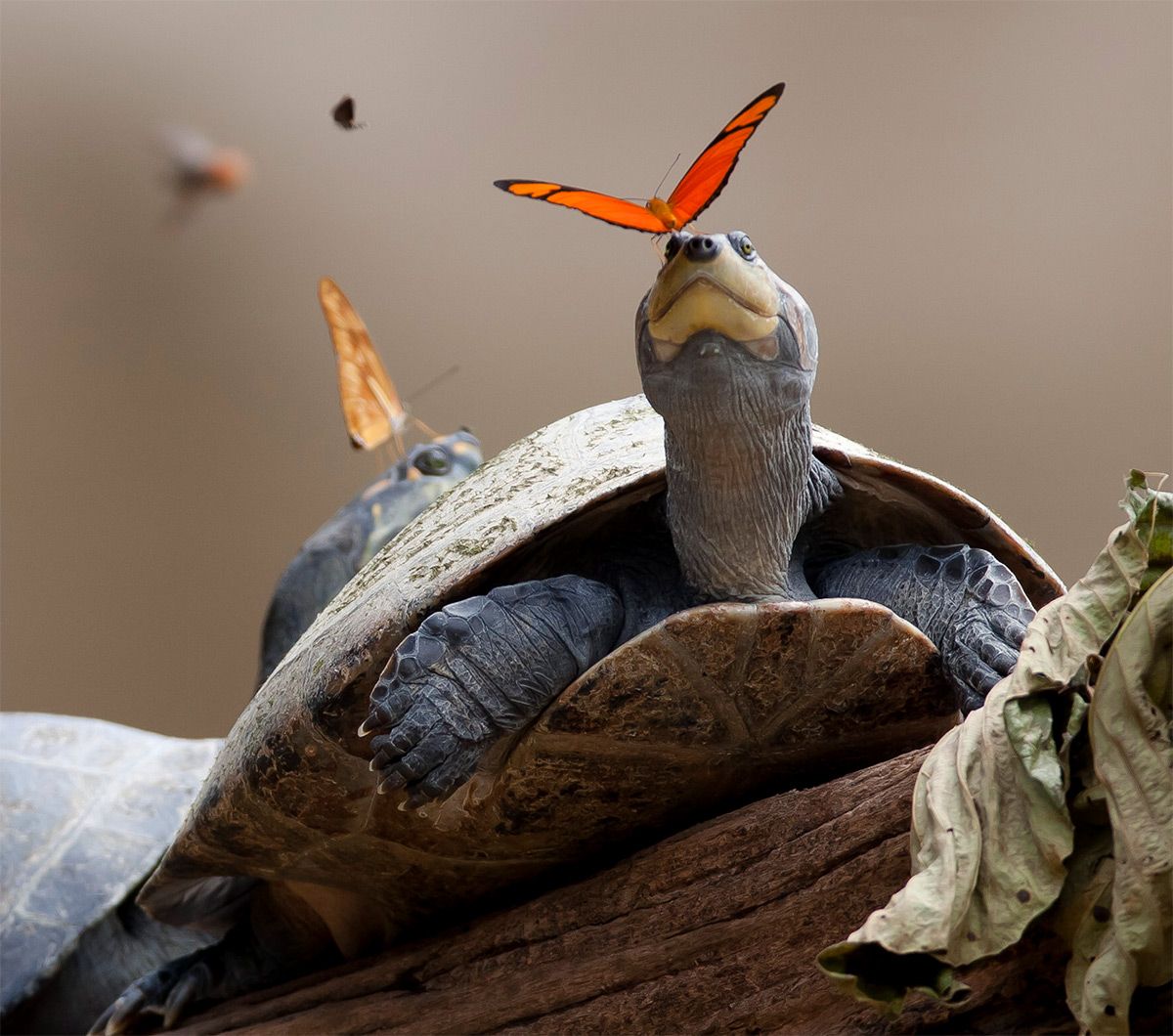 Get a room, you guys.

Bryan fires off a global warming SCUD over at Missile Test :

My lack of concern for global warming has nothing to do with denialism. I am not a crackpot or a right wing nutjob who believes that global warming is a political issue, and not a real issue. Global warming is real, it is happening now, and it will only get worse. But, my pessimistic nature leads me to believe we will deserve every single bad effect of a warming planet, and all because we, in particular Americans, are responsible for it. We have had decades to combat global warming and have done little. We have been unable to muster the will to tackle this multi-generational problem and by the time we will, it will be too late.

I attack the United States as the primary contributor to global warming, but that places the blame equally on all of us, and that is just not so. A single person can do some things to reduce their greenhouse gas emissions, such as using public transport, driving fuel-efficient vehicles, and limiting use of electrical appliances. But, the big changes that are necessary to combat global warming have to come from government, in the form of new legislation and regulations.
All actions have consequences, but some consequences are more serious than others.

As I kid I loved watching the nature shows on PBS.
If I happen to be flipping around channels and I come across one now, I’m always sucked in (the same happens if I stumble upon Cast Away or The Godfather).
Mental Floss has a great story about a wasp in Costa Rica that turns spiders into zombie construction workers:

In another post, we were talking about what happens to spiders and their webs when scientists give them a little bit of marijuana and other drugs. While researching that post, I learned that its not just humans that alter spiders’ behavior with chemicals. There’s a wasp in Costa Rica that does the same thing, in a more gruesome and sinister way, as part of its journey to adulthood.

The tropical wasp species Hymenoepimecis argyraphaga is a parasite, and it takes advantage of an unlikely host. The web of the orb weaver spider Plesiometa argyra is normally a place where bugs meet their untimely death and become spider snacks. Using an arsenal of toxins and mind-altering chemicals, though, H. argyraphaga is able to turn the spider into a slave and a meal and its web into a safe haven.
Nature rules.

CNN reports a group of men who devoted their lives to hunting powerful storms died in the middle of the chase.
How can you feel bad about a story like this? These crazy motherfuckers died doing what they loved to do: chase tornadoes.

Incredible time-lapse video of Hurricane Sandy from the top of the New York Times building.