“we will end up creating a dystopic information environment”

David Kaye, writing for The LA Review of Books on, The Digital Deluge and the Age of AI:

The public’s impression of AI is that it is machines taking over, but — for now, for the foreseeable future, and certainly in content moderation — it is really human programming and the leveraging of that power, which is a massive one for corporations. The machines have a lot of difficulty with text, with all the variations of satire and irony and misdirection and colloquial choppiness that is natural to language. They have difficulty with human difference and have facilitated the upholding of race, gender, and other kinds of biases to negative effect. Even worse, as the scholar Safiya Noble argues in her book Algorithms of Oppression, “racism and sexism are part of the architecture and language of technology.” And all of this is not merely because they are machines and “cannot know” in the sense of human intelligence. It is also because they are human-driven.

We often do not know the answers about meaning, at least not on a first review. The programmers have biases, and those who create rules for the programmers have biases, sometimes baked-in biases having to do with gender, race, politics, and much else of consequence. Exacerbating these substantive problems, AI’s operations are opaque to most users and present serious challenges to the transparency of speech regulation and moderation.

When systems scale, shit gets crazy.

“reality and fantasy weirdly and dangerously blurred and commingled”

Back in September The Atlantic published a fascinating long-form article that I just got around to reading.

It’s titled, ‘How America Lost Its Mind‘, and it was adapted by a book written by Kurt Anderson:

America was created by true believers and passionate dreamers, and by hucksters and their suckers, which made America successful—but also by a people uniquely susceptible to fantasy, as epitomized by everything from Salem’s hunting witches to Joseph Smith’s creating Mormonism, from P. T. Barnum to speaking in tongues, from Hollywood to Scientology to conspiracy theories, from Walt Disney to Billy Graham to Ronald Reagan to Oprah Winfrey to Trump. In other words: Mix epic individualism with extreme religion; mix show business with everything else; let all that ferment for a few centuries; then run it through the anything-goes ’60s and the internet age. The result is the America we inhabit today, with reality and fantasy weirdly and dangerously blurred and commingled.

Then comes the Internet:

And there was also the internet, which eventually would have mooted the Fairness Doctrine anyhow. In 1994, the first modern spam message was sent, visible to everyone on Usenet: global alert for all: jesus is coming soon. Over the next year or two, the masses learned of the World Wide Web. The tinder had been gathered and stacked since the ’60s, and now the match was lit and thrown. After the ’60s and ’70s happened as they happened, the internet may have broken America’s dynamic balance between rational thinking and magical thinking for good.

And then we get to Trump:

Donald Trump is a grifter driven by resentment of the establishment. He doesn’t like experts, because they interfere with his right as an American to believe or pretend that fictions are facts, to feel the truth. He sees conspiracies everywhere. He exploited the myths of white racial victimhood. His case of what I call Kids R Us syndrome—spoiled, impulsive, moody, a 71-year-old brat—is acute.

Who knew we’d have to be so vigilant in our fight for truth and facts in 2017.

The Problem With ‘Self-Investigation’ in a Post-Truth Era:

But somewhere along the way, the democratization of the flow of information became the democratization of the flow of disinformation. The distinction between fact and fiction was erased, creating a sprawling universe of competing claims. The internet can’t route around censorship when the people who use it remain in their own closed information loops, which is nothing more than self-imposed censorship.

A universe of competing claims is the perfect environment for the rise to power of a politician who has made a career of championing his own truths and manufacturing his own realities. Not that Trump will be our first president who likes to operate from a closed loop. Richard Nixon was broadly dismissive of the State Department and the “Ivy League liberals” at the C.I.A., relying instead on the wisdom of J. Edgar Hoover, the more like-minded head of the F.B.I.

FBI Director James B. Comey sharply criticized Apple and Google on Thursday for developing forms of smartphone encryption so secure that law enforcement officials cannot easily gain access to information stored on the devices — even when they have valid search warrants.
—Craig Timberg and Greg Miller, The Washington Post
via Daring Fireball

Don’t know what Gantt chart is? Shame on you.

Your iPhone Tracks You

This isn’t really news. As far back as 2011 we’ve known iPhones keep location log files (almost all computers keep log files of some sort), but there’s now a control panel within Settings to see where you’ve been.
Note: The actual path to the maps is: Settings > Privacy > Location Services > System Services (very bottom) > Frequent Locations

The presidential race is over, and now we can get to the best part of electing a president: data visualization, particularly maps. Every four years, Mark Newman of the University of Michigan makes a set of maps and cartograms detailing the election results. They are available here. My favorite of his is the map on how counties nationwide voted, applying percentages to red and blue to show how Republican or Democratic leaning the county was: 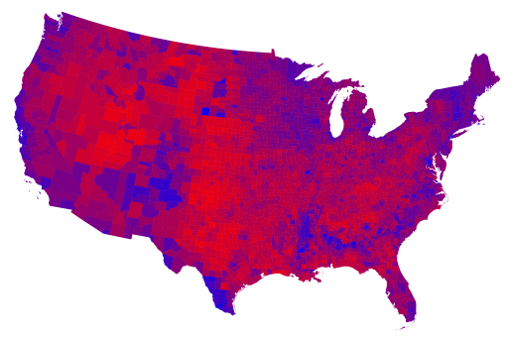