It was basically an aside — an odd and interesting nugget in an interview with Barbra Streisand that otherwise dealt with heavy topics like sexism and politics.

Indeed, most of the 2,800-word article about Ms. Streisand in Variety is devoted to detailing the actress’s decades-long efforts to break up Hollywood’s boys’ club, as the 90th Academy Awards ceremony approaches with the #MeToo movement as the backdrop.

But it was that one nugget — a brief comment about her dogs — that drew the most attention on Tuesday night.

In her interview with Variety, Ms. Streisand revealed that two of her three Coton de Tulear dogs were clones. Specifically, the magazine reported that the dogs — Miss Violet and Miss Scarlett — had been cloned from cells taken from the mouth and stomach of Ms. Streisand’s late dog Samantha, who was 14 when she died last year.

Miss Violet and Miss Scarlett “have different personalities,” Ms. Streisand told Variety. “I’m waiting for them to get older so I can see if they have her brown eyes and her seriousness.”

“The power and beauty of physical laws is that they apply everywhere, whether or not you choose to believe in them.”

I’m enjoying it. It’s just enough science for my brain not to freeze up.

To the scientist, the universality of physical laws makes the cosmos a marvelously simple place. By comparison, human nature—the psychologist’s domain—is infinitely more daunting. In America, local school boards vote on subjects to be taught in the classroom. In some cases, votes are cast according to the whims of cultural, political, or religious tides. Around the world, varying belief systems lead to political differences that are not always resolved peacefully. The power and beauty of physical laws is that they apply everywhere, whether or not you choose to believe in them.

Of course, the key to this is knowing how to deploy the proper metaphors:

You will find most (known) dwarf galaxies hanging out near bigger galaxies, in orbit around them like satellites. The two Magellanic Clouds are part of the Milky Way’s dwarf family. But the lives of satellite galaxies can be quite hazardous. Most computer models of their orbits show a slow decay that ultimately results in the hapless dwarfs getting ripped apart, and then eaten, by the main galaxy. The Milky Way engaged in at least one act of cannibalism in the last billion years, when it consumed a dwarf galaxy whose flayed remains can be seen as a stream of stars orbiting the galactic center, beyond the stars of the constellation Sagittarius. The system is called the Sagittarius Dwarf, but should probably have been named Lunch.

This book is proving to be a fun, fast, and an enlightening read.

Researchers have created a viable hybrid part-human, part-pig embryo for the first time in history. According to a study published in the journal Cell Thursday, researchers were able to successfully inject human stem cells into a pig embryo and grow tissue that would form the early stages of human organs like the heart, liver and neurons. Although it’s in the very early stages, experts believe the human-pig chimera could one day be used to grow transplantable human organs in farm animals.

Give me a second to process this.

Light-based computers are on the horizon:

“The phase speed is infinite—much larger, infinitely larger than the speed of light,” Mazur tells Quartz.

This doesn’t mean light itself is traveling faster than the speed of light, which would violate the laws of relativity. “Phase velocity” refers to the speed of the crest of waves that ripple out when light strikes a material. The Harvard scientists created a material that allows these wave crests to move infinitely fast. This is a strange thought to wrap your head around, and means the crests of the waves are oscillating through time, but not space. Under these peculiar conditions, the Harvard scientists found that it’s easy to manipulate the photons, squeezing them down to the microscopic scale and turning them around. In other words, we can treat photons in the same way we currently manipulate electrons.

Light-powered telecommunications would allow phones and computers to process information millions of times faster. And because light conserves energy far better than electrons (which tend to waste energy by creating heat), battery lives would be far longer.

via Rands in Repose

“you can scramble an egg, but can never unscramble it”

It appears that the standard tools used to identify chaotic signatures might be missing lots of hidden chaos — especially in systems that seem like they’re not chaotic at all.

Chaos theory is famously associated with so-called “strange attractors,” marked by a telltale butterfly-wing shape (see above). But according to a new paper by two University of Maryland mathematicians, sometimes chaos looks more like “a strange repeller,” or something else entirely.

I’ve been saying this forever.

Researchers have grown a partially functioning rat limb in a lab. 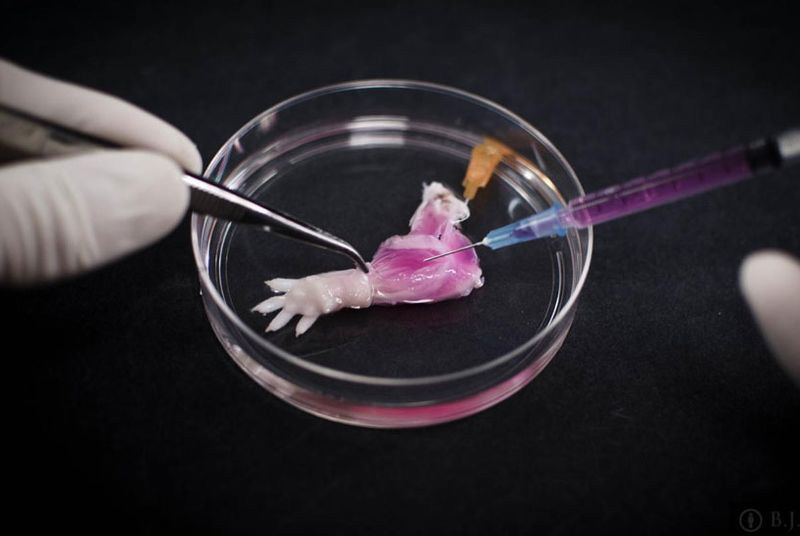 What could be the most important scientific experiment of our lifetime is about to begin. The so-called Holometer Experiment at the Fermi National Accelerator Laboratory aims to determine whether our perception of a three-dimensional universe is just an illusion. Do we actually live on a 2D plane, as a holographic projection? There is a well-established theory that states we are indeed living in a hologram, with a pixel size of about 10 trillion trillion times smaller than an atom. This has certain implications, some of which are quite sinister, even unspeakably horrific.

The argument about the nature of the universe hinges on something that 99.99% of people are not able to comprehend even on the most superficial level — namely, a comparison between the energy contained in a theoretical flat universe with no gravity and the internal energy of a black hole, and whether these two energy levels match or not.
—Tero Kuittinen, BGR.com
Huh?

—George Carlin
This one deserves a repost.

Sure, we’ve got the iPhone’s Siri, and the Food and Drug Administration just approved a prosthetic arm controlled by signals from the brain — but where are our smooth-gliding flying machines, our Landspeeders (“Star Wars”) and airborne DeLoreans (“Back to the Future”)?

You may think that the absence of such cars speaks to a failure of engineering or distorted incentives in the marketplace. But the humbling truth is that we don’t have these vehicles because we still don’t know, even in principle, how to directly manipulate gravity. Indeed, the cars missing from our skies should serve to remind us that, to a degree rarely appreciated, we have surprisingly poor control over most of nature’s fundamental forces.
—Adam Frank, The New York Times

Stephanie Smith, writing for NBC affiliate KXAN in Austin, Texas on a scan that may detect brain disease in the brains of NFL players:

An insidious, microscopic protein that has been found in the brain tissue of professional football players after death may now be detectable in living people by scanning their brains.

Researchers say they found tau protein in the brains of five living retired National Football League players with varying levels of cognitive and emotional problems.
Research like this is great and should continue, but I have a better idea.
How about dudes stop running full speed at each other and smashing their heads together?
It might, just might, get rid of that pesky, “insidious, microscopic protein.”
Call me crazy.
Thought: I’d be interested to see if anyone has compared the condition of brains between NFL players in the United States and brains of rugby and Gaelic football players. Given the latter two don’t wear helmets during game play my guess is they’re much less likely to smash their heads into others’ and thus be less likely to get brain disease later in life.

TechHive: AT&T will buy mobile spectrum from Verizon for $1.9 billion
It fascinates me sections of the electromagnetic spectrum are buyable. I assume I shouldn’t as we can buy land.
Will the visible spectrum ever be monetized? Will companies ever try to own red, blue or green light waves?

NASA doesn’t have one of the prettiest sites on the internet, but it is the most dynamic and vital among American government sites. A little digging and a user can unearth all sorts of treasures. A great one is the Apollo 11 Image Library, which features high and low quality scans of almost every single photograph the Apollo 11 crew took during their flight. There are hundreds of images on that page, from the familiar, iconic images NASA released following the mission, to a few shots when Neil Armstrong or Buzz Aldrin accidentally hit the shutter on their cameras while they were pointed at the ground. It’s an archival page, and NASA, to their credit, shows just about all they have…except for the aliens…or Kubrick. Here are a few of my favorites: “We took a rat apart and rebuilt it as a jellyfish.”

From Nature.com (via The Atlantic):

Bioengineers have made an artificial jellyfish using silicone and muscle cells from a rat’s heart. The synthetic creature, dubbed a medusoid, looks like a flower with eight petals. When placed in an electric field, it pulses and swims exactly like its living counterpart.