NYT: Windows Could Use a Rush of Fresh Air

The best solution to the multiple woes of Windows is starting over. Completely. Now.

Pixar, recently purchased by Disney, could crank out multi-billion dollar confections. They know all the moves, they have the chops to create merchandising powerhouses. And with just one movie a year, they certainly must have been under huge pressure to do just that.
And yet, instead, they make a great movie. A movie for the ages. A film, not 90 minutes of commerce.

So Microsoft has been circling Yahoo like a vulture. Microsoft now says that it’s not interested anymore, no deal. I don’t buy it and I don’t think this is the last we’ll hear of the whole debacle.
On my little consumer/member side of things, I’m feeling the ripples.
First off is the exit of Flickr co-founder Stewart Butterfield and his great resignation letter to Yahoo.
While the letter is hilarious and witty, there’s a lot of truth behind it. The thought of a Microsoft-owned Flickr makes me uneasy and I can promise that if it comes to pass, I will delete my account. I can just picture MS re-engineering the Flickr platform like they did with Hotmail (didn’t it take them over 6 years to re-build Hotmail on MS software?)
Second off is the exit of del.icio.us founder Joshua Schachter. According to reports, version 2.0 of del.icio.us has been in the works for a while now, but is sitting in the backyard up on cinder blocks being idle, waiting for its turn.
Microsoft has the exact opposite effect of the Midas touch. Truly amazing. Thanks for nothing MS.

So ok, everyone is posting Carlin clips this week. Most are posting “The 7 words you can’t say on television”.
Fine. Good for you, it’s a classic. (Let it be noted I posted that clip on March 3rd)
I’d be curious to find out how many of these people were actually familiar with that skit prior to this week.
I discovered George Carlin in the mid 90’s. The first special I saw was Jammin’ in New York (1992) back in 1993. I still think it’s one of his best. Some of the jokes were used on previous stand-up specials prior to ‘Jammin’ (such as Parental Advisory: Explicit Lyrics).
Some people will say that’s weak, but the truth is, comedy, real comedy, is an art and it takes practice. Jammin’ in New York represents a perfect comedic rhythm, jumping back and forth from comedy to philosophy to observations the way only George could do. The jokes he tells for the second time (or third) are polished and complete.
Jammin’ in New York is a perfect mix of biting social commentary and comedy – a time before George dove too far into pessimism (realism? Just compare it to something like Toledo Window Box -which I have on vinyl from my parents). Once his wife died in 1998, his stand-up acts took a serious turn, still brilliant but bitter – not that I wouldn’t be bitter too.
I always considered Carlin my favorite philosopher, not favorite comedian.
So with that said, one of my favorite bits is on airline announcements:

There Are No iPhone Killers
Pretty obvious points about Apple’s success, but sometimes you need someone to just say it:

But if you can reach back in your mind to the pre-iPhone time, you’ll remember that four main icons for navigation and several rows of icons for applications is not some universal navigation standard for smartphones. Apple engineers created it, and it already seems so natural that other companies have more or less “adopted” it for their own products.

The Employable Web Designer
We can all tweak and argue Mr. Rutledge’s list of requirements, but overall, his right on point.
Designers who also develop have more power
Yes. This is true.

I found this shirt over the weekend and decided to find out the deal with the Ames Bros.
Verdict? They do good work (although their website needs serious help).

So flew Virgin America this past week. They have a good attitude and sense of humor which is refreshing when you’re flying. The interior is has been modernized on the surface – using things like diffused neon lighting and shiny white plastic shells on various surfaces (it’s lipstick on a pig, as much as can be done with a standard plane interior).
What really made my trip was the fact that the entertainment console had DOOM as one of the featured games.
It made my trip until DOOM froze my console twice. It’s always something, ain’t it? 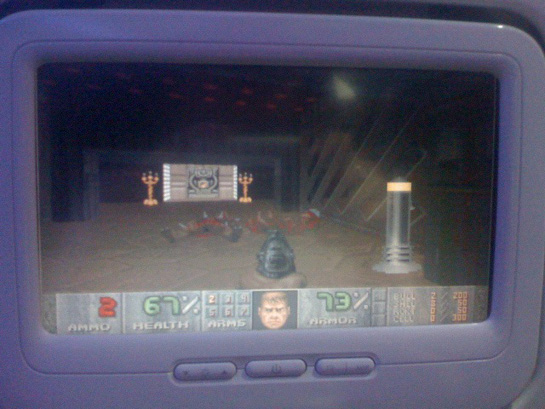 I want to howl

I saw this in Borders during my trip to SF.
Allen Ginsberg’s collected poems next to a biography of Backstreet Boy Lance Bass. Yeah. Ok. I guess it’s democratic – all books are equal and living peacefully together, but it doesn’t mean I didn’t almost throw up in my mouth when I saw it.

Only designers will get this 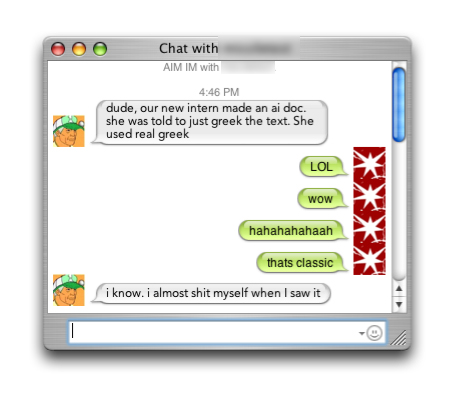 Webmonkey has redesigned their site (again). I’ve seen some posts poking fun at them for another redesign, people wondering what the point is.
The point for me is that I’m glad Webmonkey still exists. I’m actually amazed it still exists.
When I graduated college in 1999 with a degree in Graphic Design (read ‘print design’), I made the choice way back then to become a web designer. I loved print, but the web was way too interesting for me to let go of. My next step was to learn how to do this web stuff, and since we didn’t have courses on web design, Flash or HTML back then (and our computers were steam-powered and made of wood) the place I turned to was Webmonkey.
For anyone in the process of learning web design, I highly recommend browsing through some of their lessons and tutorials. I would bookmark their HTML & Special Characters Cheatsheets, I use them to this day.

Jedd Flanscha has an interesting experiment going on over at Yield Media.
We need more experiments like this.
Heed to Design and stay vigilant!

We wouldn’t want to “dampen the world’s appetite for oil” now would we?
Shit, they might go and find something that’s better than oil, and that would suck!

The flowers. Are Still. Standing!!!

from the NY Times:

And while Mrs. Clinton reminisced about her campaign and talked of a need to unite the party, she did not concede, and indeed did not acknowledge that her rival, Senator Barack Obama, had passed the threshold of delegates needed to secure the nomination.

She’s a resilient little bugger, ain’t she?
Like a cockroach you step on but won’t die.