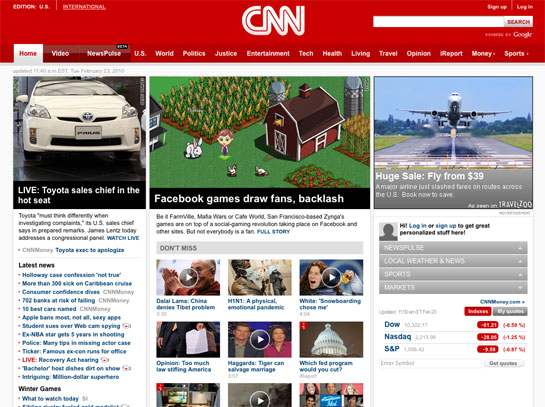 I have to say, since they redesigned their site in 2009, there’s absolutely no heirarchy on the homepage of CNN.com.
Apparently a spotlight on Facebook games is more important than the biggest recall in automotive history by Toyota.
Unless you were looking at the advertisement on the right first. 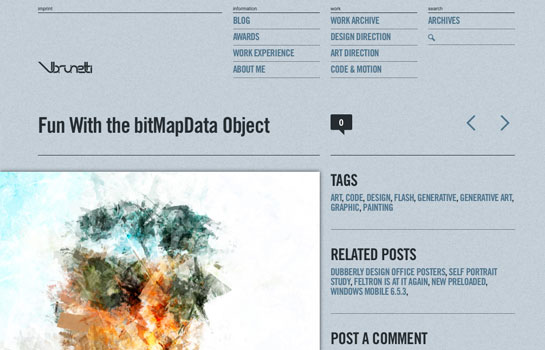 Giving a linkup to my boy Victor’s impressive 2010 portfolio redesign. I first linked up to Victor’s site in 2007 while I was working at Schematic. Two weeks after my linkup, by sheer coincidence, he’s interviewing with my design team and gets hired. Fast forward 3 years and we’re good friends and working together at Roundarch.
So what’s so impressive about this redesign?
Well Vic has managed to tame the beast that is @font-face so you should see custom fonts throughout the site for all the headers, titles and global nav. Mind you it’s real HTML text, and it’s not being rendered with sIFR.
In addition, he’s unified his blog and portfolio on a custom install of WordPress. Sure, this trend might not be new, but he’s taken the time to treat every section of his site differently, in a way that’s appropriate for the content type so the only section that feels like a blog is the actual blog section. A lot of big agencies haven’t even gone that far with their own sites.
…and, he’s also working on some great generative art experiments in Flash.
Big ups.

I don’t have the luxury of being able to write on as much as I’d like so many times topics and theses on my mind end up scattered into separate posts and tweets.
So back to my proposition that Adobe take Flash to it’s logical end and have it function as the core operating system for their own mobile device(s).
It’s important that Adobe make this move because the best examples of Flash are not mere videos players on otherwise HTML-rendered sites. The best examples are those that take over the browser and go fullscreen, where Flash controls the seemless experience from beginning to end. Take a look at the amazing commercial and personal sites on theFWA to see what I’m talking about.
The artists, designers and developers that make the most out of Flash don’t treat it as a plug-in – they treat Flash as their medium.
It’s been very easy for Adobe and the rest of the tech press to point fingers at Apple and their control freak tendencies, claiming that Apple is going to cause Flash’s demise.
It’s in times like these that companies like Adobe need to stop crying like fucking babies, strap a set, and change the rules of the game. Whether or not Steve Jobs called Adobe lazy, I’ll have to agree. Adobe has great opportunities in front of it. Make no mistake that if Adobe does decide to build their own Flash-powered phone, they’ll be taking a huge risk, but a risk well worth the time and money invested.
With so many companies still not understanding that it’s all about having great software, it’s Adobe’s time to shine and not try to compete or try to beat Apple, but just to provide a great product and platform for people to develop for. 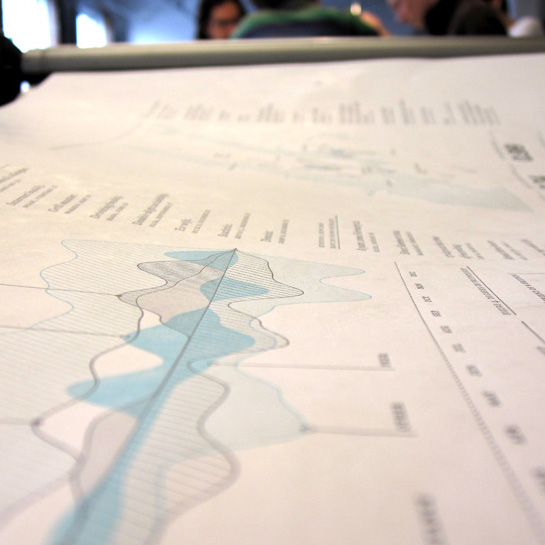 I just received this link from Nicolas Felton on the progress of the Annual Report I ordered.
I can’t wait.

Adobe Needs Their Own Phone

I’ve been reading, thinking and talking a lot about the iPhone and iPad and their lack of Adobe Flash. My problem, as always, is that I see both sides of the argument.

The Argument Against Flash

First, I see Jobs’ point of view – Flash is processor hog, buggy and hasn’t been optimized for mobile devices. I also can’t think of one Flash site that would work well when viewed on my iPhone. Youtube helped Apple launch a ‘Flashless’ video application for the iPhone in 2007 so the most popular place for online video was covered from the start.
The other online content not viewable on the iPhone is Flash games, and there are a lot of them. But to that I say native iPhone games are far superior to Flash games. They take advantage of all the native hooks and hardware that Flash games can’t like accelerometers, multi-touch, and OpenGL.
For the past 2 years of owning an iPhone I’ve never had one instance of wishing I had Flash installed. The way I use my iPhone is much different that how I use my MacBook Pro. Obviously Apple has shaped what I view to be a ‘superior’ mobile web experience, but I would argue that even if Flash were installed in Safari from the start, I wouldn’t be trying to view rich, Flash film sites or FWA winners.
The plug-in, a group to which Flash and Java belong, is dead as far as mobile web browsers. Sure, Flash 10.1 is coming to Android, but it’s still not going to be included on the upcoming Windows Phone 7 Series. Flash is actually not on very many mobile units at all (If you want a good laugh, see the amazing non-smart phones that support Flash Lite on Adobe’s site).

Now as much as I might not want Flash on my iPhone, I’m also an interactive designer and developer. For the last 11 years, Flash has let me create websites that combine time, sound and motion that ultimately result in an emotional reaction and connection with the viewer. You can’t achieve this with just HTML and CSS (even if you add in JavaScript).
So now that Apple has kneecapped me, making it impossible to create immersive experiences without learning how to use their SDK, what am I do to? The whole beauty of Flash was that it let inexperienced designers create interactive animations, interfaces and applications without having to get a PhD in computer science.

This is the logical next step for Adobe. Over the years, they’ve gradually been giving Flash more and more robust functionality, expanding out from the mere animation realm and into the world of 3-D environments and applications (through Flex and AIR)
Why would Apple ever in their right mind allow Adobe onto their iPhone and continue on this trajectory?
Adobe wants people to continue to make Flash applications and Flash games and be able to deliver them via the web to as many people as possible – and they should, but if they want to see this dream become a reality, they’re going to need to build their own phone.
Over 28 years later, The words of Alan Kay are ringing more true than ever:

Remember, it’s all software, it just depends on when you crystallize it …People who are really serious about software should make their own hardware.

—Alan Kay, Creative Think (computer industry seminar), 1982
We’re seeing this with all the major mobile players now – even Microsoft is cracking down on how customizable their new mobile OS is, and how particular the hardware requirements are.
I don’t know about you, but I can picture the Adobe Phone. It’s a phone that lets Flash have complete access to all levels of the unit, runs smooth, fast and doesn’t drain resources because it has no longer been relegated to a mere plug-in.
The Adobe Phone would also let interactive designers like me design, test and deploy our creations without application submissions and approval processes. I’ve been doing it for years on my own as a web designer with an FTP program and web browser. It shouldn’t be any different for mobile phones.
Apple has proven when you build a great platform, great things are possible from the community that adopts it. Adobe should know this first hand from the millions of people who create amazing games, applications and experiences with Flash – why not leverage that community on their own phone with their own platform?
The solution to the problem lies within the problem itself. Adobe, you don’t need the iPhone or the iPad to be a success. Make your own platform. Make your own phone. It could really be awesome.

It’s all about the consumer, really

The GSM Association today unveiled an alliance for a common app store platform meant to challenge Apple. Known as the Wholesale Applications Community, the service will create an open, standard way of developing and selling apps across multiple phone operating systems and networks. The partnership will include phone builders LG, Samsung and Sony Ericsson, as well as 24 major carriers that include all four major US networks and major internationals like China Mobile, Orange and Telefonica.

First off, understand that this isn’t about making an amazing mobile application experience. This is what companies do when they face competition and don’t want to invest the time and energy to create something innovative.
Sure, on the surface is sounds great, but don’t be fooled.
Also:

GSMA explains the move as a bid to avoid “fragmentation” in the mobile app industry, where different operating systems have led to many apps only being available on some platforms and in some cases only for certain carriers.

What I see happening in the mobile phone industry reminds me very much of the events in Ayn Rand’s Atlas Shrugged. Specifically the “Anti-dog-eat-dog” rule that the railroad companies make for the common good of the public.
It’s bullshit.

“I don’t really care about being right…”

Costa Rica.
I’m a fan.
Gina and I spent 6 days walking, sunning, swimming, eating, drinking, sunning, eating and drinking.
Oh, we also did some zip-lining through the jungles in Guanacaste province. 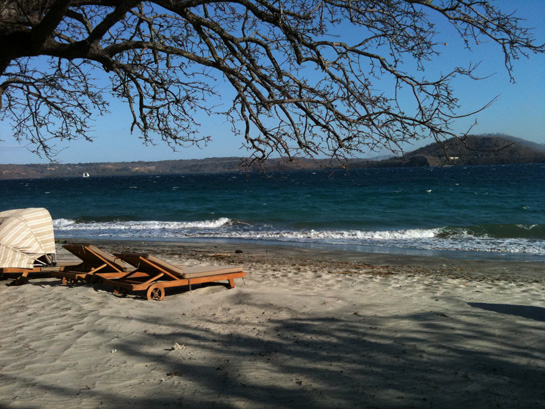 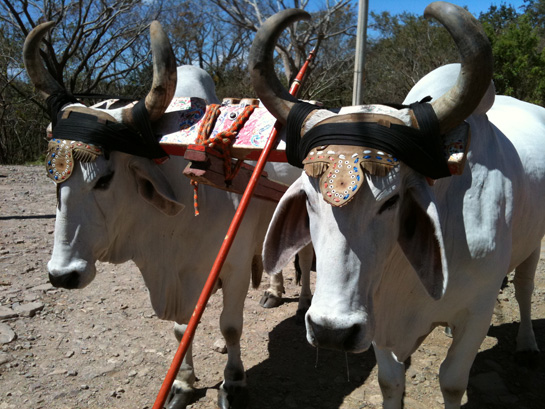