It seems Elliot Tebele, founder of Fuckjerry, is finally starting to understand what copyright law is and has issued a statement via Medium:

I know I’ve made enemies over the years for using content and not giving proper credit and attribution to its creators. In the early days of FuckJerry, there were not well-established norms for reposting and crediting other users’ content, especially in meme culture. Instagram was still a new medium at the time, and I simply didn’t give any thought to the idea that reposting content could be damaging in any way.

In the past few years, I have made a concerted, proactive effort to properly credit creators for their work. We have also updated our policies to make sure we are responsive to creators whenever they have reached out to us about posts. It hasn’t been a perfect system, but I do feel it was a significant improvement, as many of my peers have approached these issues in the same way.

Given the conversations over the past few days, and the issues that have come to light, it is clear however, that we need to do better.

Effective immediately, we will no longer post content when we cannot identify the creator, and will require the original creator’s advanced consent before publishing their content to our followers. It is clear that attribution is no longer sufficient, so permission will become the new policy.

Comedic video editor Vic Berger posted a very Berger-y video making fun of Tebele that was pulled from Youtube but has reemerged on Vimeo.

The challenge takes the core concept of Bird Box — wearing a blindfold at all times while wandering around outside — and applies it to a certain period of time. Some people, like YouTube creator Morgan Adams, have tried to go about their daily lives for 24 hours while blindfolded, while others have attempted the challenge for a shorter period.

Netflix’s social media team called out the challenge on Twitter, asking people to not hurt themselves while performing the act.

Seems I already have contenders for my 2019 Darwinism Awards.

Actor Alfonso Ribeiro is suing to stop two video game developers from selling a dance popularized by his “Fresh Prince of Bel-Air” character.

In two lawsuits filed Monday, Ribeiro said the companies have “unfairly profited” from using his likeness and from exploiting his “protected creative expression.” The suits name Fortnite developer Epic Games Inc., and Take-Two Interactive Software Inc., creator of the NBA 2K series, and several of its subsidiaries.

Epic Games and Take-Two subsidiary 2K Games did not respond to a request for comment on Monday.

The lawsuits ask a California federal court to bar the game developers from using, selling or displaying the dance. The suits state that Ribeiro is in the process of copyrighting the dance.

Wouldn’t NBC own the rights to the dance (aka the ‘Carlton’) Ribeiro did on “Fresh Prince of Bel-Air”?

What a weird world we live in.

The Dirtiest Block in San Francisco

Over at The New York Times, Thomas Fuller reports on the 300 block of Hyde Street, the dirtiest block in San Francisco:

Just a 15-minute walk away are the offices of Twitter and Uber, two companies that along with other nameplate technology giants have helped push the median price of a home in San Francisco well beyond $1 million.

This dichotomy of street crime and world-changing technology, of luxury condominiums and grinding, persistent homelessness, and the dehumanizing effects for those forced to live on the streets provoke outrage among the city’s residents. For many who live here it’s difficult to reconcile San Francisco’s liberal politics with the misery that surrounds them.

I live in San Francisco and the income gap is staggering.

I’ll concede that the 300 block of Hyde Street is the dirtiest in the city, but there are many neighborhoods covered by entire lengths of sidewalk full of pitched tents, with homeless people staggering about.

For years I’ve darkly joked living in San Francisco feels like I’m in an episode of The Walking Dead. It’s hardly a hyperbolic statement.

Update: This Times article has over 1,000 comments. Here’s one from Patrick Ecker:

There’s an app the city has for reporting homeless encampments and
other quality of life issues, called 311.

In the month of August ALONE, I reported about 600 encampments. SIX
HUNDRED. And on September 1, there was ZERO noticeable difference. I
emailed the mayor, my police captain (Gaetano Caltagirone), and my
supervisor (Rafael Mandelman). I heard back from Rafael (who is
generally very responsive), but not the mayor’s office or the police.

I have a wife and son, and I worry every day for their safety.

While speaking last week to USA Today, Mr. Groening was asked if he had “any thoughts on the criticism of Apu as a stereotype.”

“Not really,” Mr. Groening responded. “I’m proud of what we do on the show. And I think it’s a time in our culture where people love to pretend they’re offended.”

Groening is right. People love recreational outrage. People eat up things to get pissed off about like I can eat up Reeses Pieces.

While we’re on the subject, I’m offended by the portrayal of Americans as idiots through Homer Simpson. All Americans are not idiots. That’s a broad generalization. Most Americans are idiots.

Of course I’m not in that group. I’m clearly an intellectual blogger. 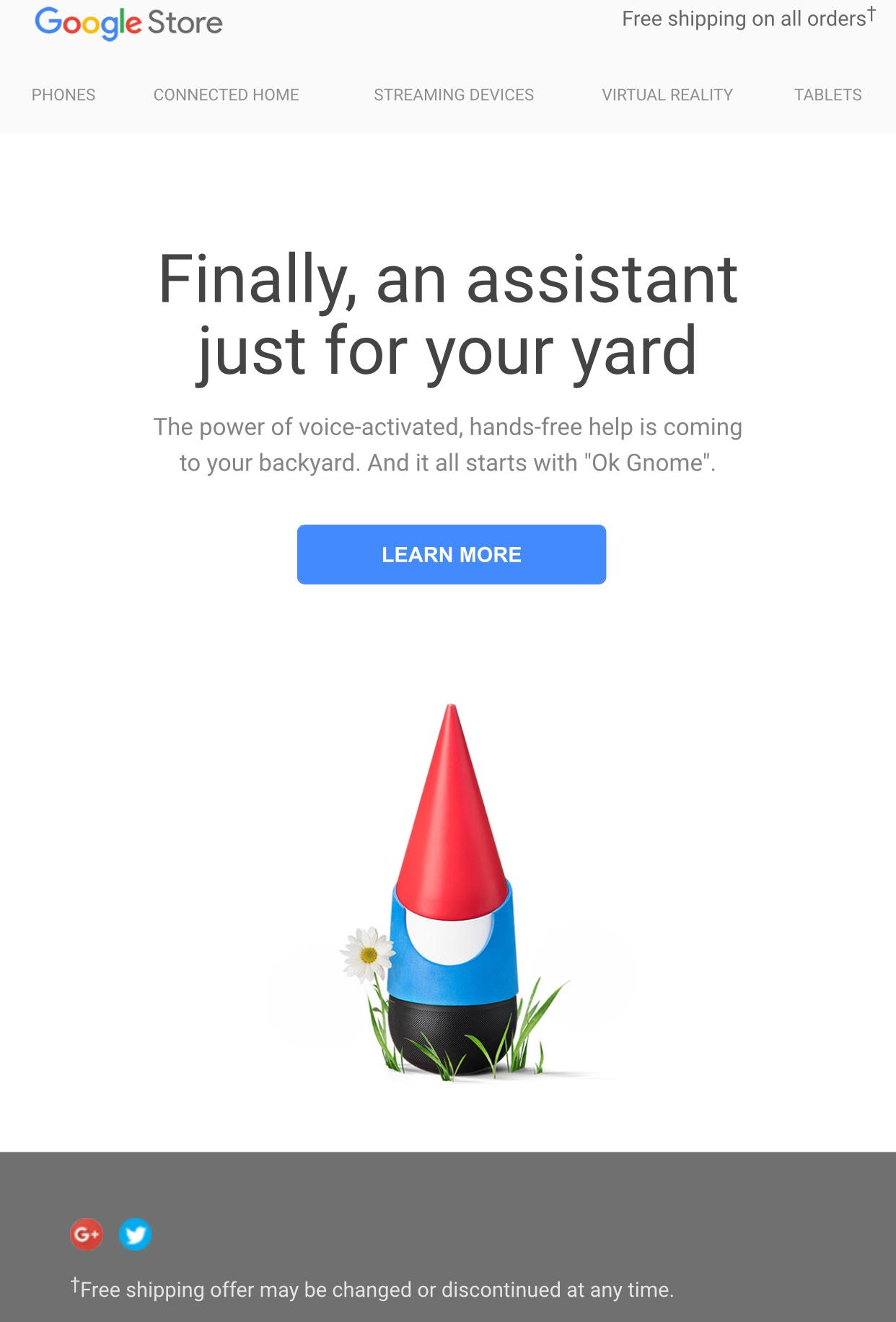 Guys, this is really lame.

And I just got this 30 minutes ago — it’s still Match 31st in California, idiots.

For the first time, more people subscribe to Netflix than have DVR:

Not surprising. The only people I know who record stuff on a DVR are my mother-in-law (she records The Ellen Show), and my father (he records Judge Judy and Judge Milian).

Everything I watch is on either iTunes, Netflix, or YouTube, and I get my news online or from Twitter. I rarely watch TV news.

Planet of the Apps

Apple has a new reality TV series called Planet of the Apps launching this year (no release date yet).

This show looks super cheesy and it seems like they’re trying way too hard to be cool having celebrity judges like Gwyneth Paltrow and Will.i.am (let us not forget the crappy smartwatch Will.i.am announced in 2014). It feels like they smashed Shark Tank together with The Voice and tweaked to make it more Silicon Valley-ish. And the name: Planet of the Apps? Oof.

As designer who has designed mobile apps, this show does not appeal to me at all. My opinion might be in the minority, but I’d much rather see designers and developers pitching and collaborating with venture capitalists and mentors on mobile app ideas without all the glitz and glamour.

Apple’s products are all about paring something down to it’s essence. Why couldn’t this philosophy be applied to their original content?

My Newsletter: Mikey Likes It

Imagine if, when you checked your email, it wasn’t all junk. Imagine if there was a message you looked forward to getting every week. This the goal with my new newsletter, Mikey Likes It. It goes out every Tuesday morning. Here’s the first one that went out this past Tuesday.

What motivated me to start it was looking at all the different things I have my hands in: this site, my podcast, what I’m reading, what I’m listening to, movies I’ve seen, and all personal projects I’m creating.

Sign up here and I guarantee you’ll have at least one thing in your inbox that doesn’t suck.

“They all got addicted to crack.”

The Netflix Backlash: Why Hollywood Fears a Content Monopoly:

Still, at a time when business is tough all over in the entertainment industry, there is a lot of gratitude for a deep-pocketed buyer that is snapping up an array of material, much of which might not find a home elsewhere. Netflix and its chief content officer Ted Sarandos are at once a savior, offering a giant gush of money to license shows that in some cases were past their prime or even out of production, and a terrifying competitor to studios.

“Out of the blue Netflix comes into the market and says, ‘We’re going to give you a number [to license a network show],’ ” says one television agent. “For the studios, it was, ‘Holy shit. Do we even need a cable sale?’ They all got addicted to crack. Nobody really thought they’d be a competitor on the originals market. They used stuff from the studios and became important. Now you see the backlash.”

It’s important to understand who’s not scared of Netflix: the actors, writers, directors and everyone else behind the great shows Netflix is buying. Creative people with talent who create great content have nothing to worry about.

From interviews I’ve seen with people who have worked with Netflix, they all say it’s great. Netflix gives them free rein over everything and they don’t meddle in the process (as it should be).

“You don’t lick it off the rocks.”

I found a video clip with two of my favorite comedians of all time.

George Carlin has been my favorite comedian since I discovered him in high school over 20 years ago. What I’ve come to see and appreciate from him as an adult is why he was great: he considered what he did art. And as an artist he had a strong creative habit which is one of the reasons he did what he did until he died (as he admits, genetics and luck also played a big part too).

Towards the end of the interview, Stewart asks Carlin, “You’re at a point in your life […] Why do you care so much?” To which he replies, “You wouldn’t say to Picasso, when ya gonna put those brushes down. Get ridda da canvas, ya done it! I’m an entertainer, first and foremost, but there’s art involved and an artist has an obligation to be on route, to be going somewhere, there’s a journey involved here and you don’t know where it is, and that’s the fun…”

Then, to put a cherry on top of the whole thing, Carlin tells Stewart at the end when they’re wrapping up, “It’s been great to know you a little, and you are going to show us a lot, and I look forward to it.”

How right he was.

Narcos was good, but still not as good as Breaking Bad.

I burned through season 2 of Narcos this weekend with my wife. Pretty good, but not as good as Breaking Bad (Breaking Bad is my benchmark). My main issue is with the depiction of Pablo Escobar. He was not as solemn as they made him in the show. He was a jovial, fun guy when he wasn’t bashing guys’ faces in.

I think Digital Kitchen did a great job with the main title graphics:

Season 2 is done, Pablo is dead (fuck you, he died in 1992, that isn’t a spoiler), but there are still plans for a season 3. Interesting.

Taken from a great episode of Comedians in Cars Getting Coffee with John Oliver.