The White House Called a News Conference. Trump Turned It Into a Meandering Monologue:

WASHINGTON — In theory, President Trump summoned television cameras to the heat-baked Rose Garden early Tuesday evening to announce new measures against China to punish it for its oppression of Hong Kong. But that did not last long.

What followed instead was an hour of presidential stream of consciousness as Mr. Trump drifted seemingly at random from one topic to another, often in the same run-on sentence. Even for a president who rarely sticks to the script and wanders from thought to thought, it was one of the most rambling performances of his presidency.

“We could go on for days,” he said at one point, and it sounded plausible.

I rarely watch Trump speeches but I made myself sit through this one. It was really, really bad.

They let you do it.

It is a paradox that the most litigious country in the world—a country whose founding documents were largely drafted by lawyers, and whose constitutional true north has long been the constraints afforded by the law—elected a man who has spent the bulk of his life creating a two-tiered system, in which some men are bound by law and others float away from it. We knew long before he was elected that Donald Trump would not be bound by the rule of law, or by the norms of a system dependent on checks and balances. He told us as much. During the campaign he floated the prospect of torturing the families of enemies, and rewriting libel laws, and banning travelers to the United States based on their religion. Sure, it maybe sounded like hyperbole, and it maybe sounded like campaign-speak, and even as some of those efforts were effectuated, including the Muslim ban and family separations, and even as the norms about nepotism and self-dealing and disclosure were brushed away, it still seemed as if a country founded on law would locate some guardrails.

—Dahlia Lithwick, The Law Is for Suckers

They were drowned out.

The booing began immediately. The music on the loudspeakers was turned up, either to herald Trump’s arrival or to stifle the crowd’s displeasure in reaction to it, but the sound of those boos was overwhelming. A few Trump fans scattered throughout the room cheered, but they were drowned out. Three rows down, a young couple held up a sign that said “Impeach and Remove.” There was no introduction like there had been at the World Series last week, no sense of ceremony or occasion, no video of the president and his sons on the Jumbotron, no “Lock him up” chants — but for a moment, the environment, already full of alcohol and flush with three hours of fights and charged for more, felt volatile.

This is why Trump continues to hold rallies – they’re the only places where people aren’t booing him. 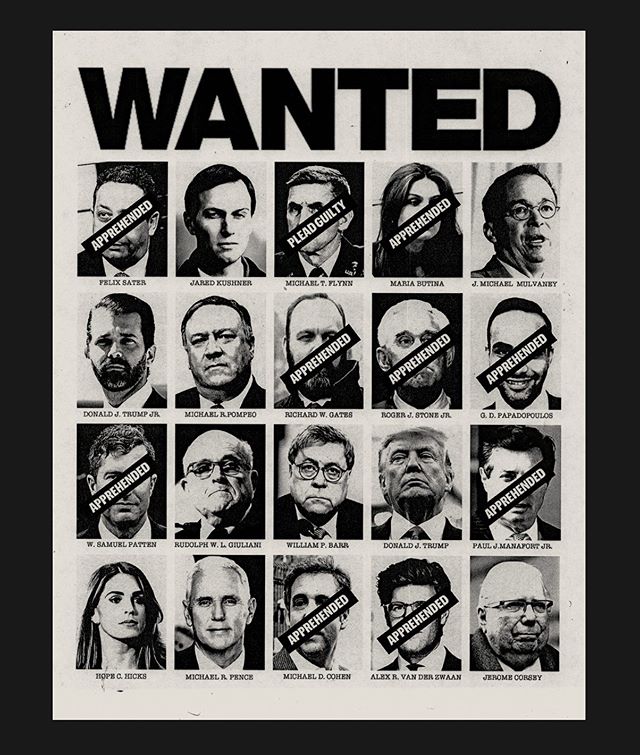 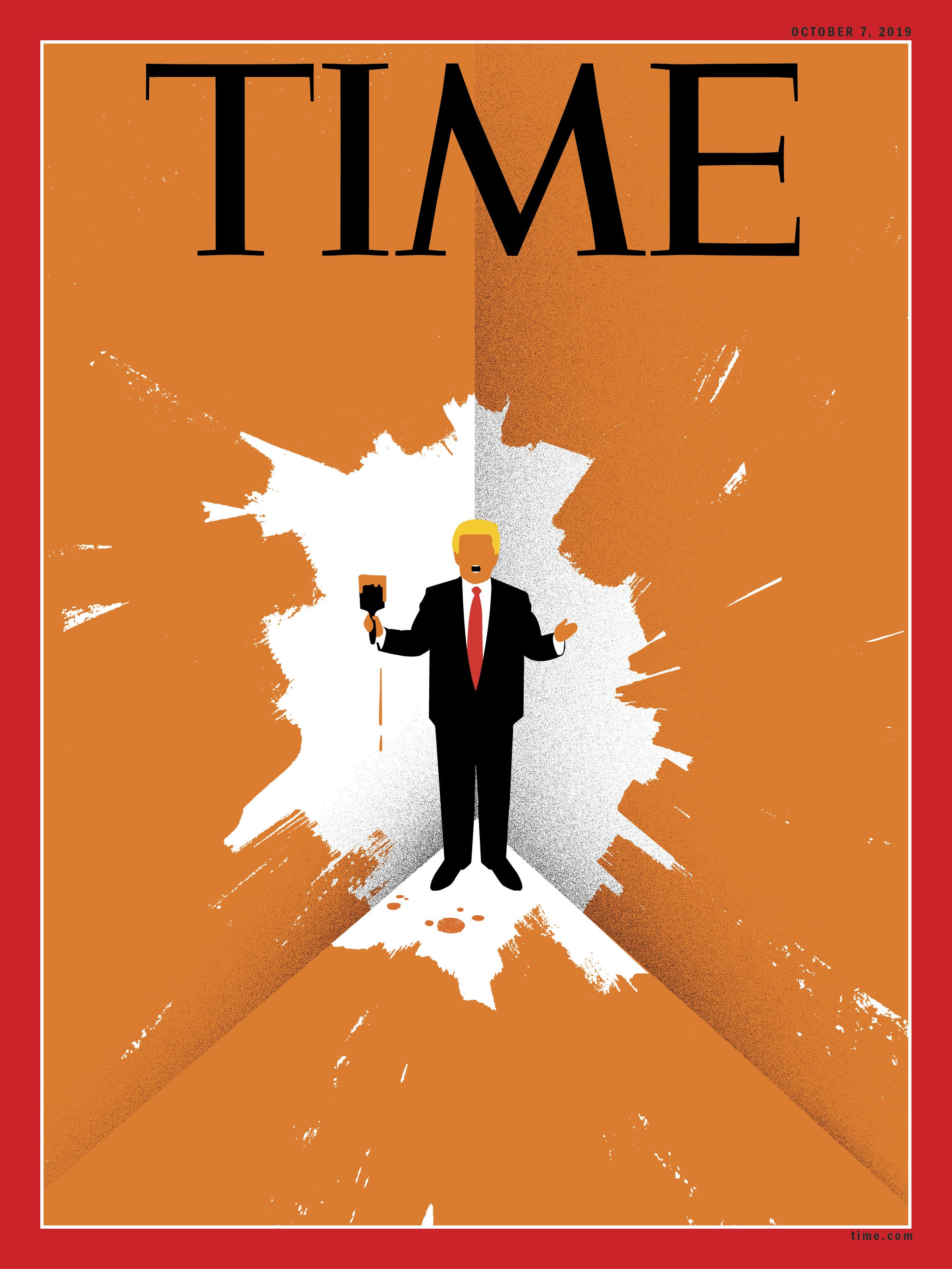 “Democrats in leadership pretend at conviction and lack courage.”

Slate: Democratic Reluctance to Even Utter “Impeachment” Is Becoming Untenable:

The problem with Democratic pointillism is that if congressional Democrats truly refuse to see the big picture, after the staggering proof put forth in the Mueller report, the daily reports of gross financial misconduct and corruption, and the administration’s growing refusal to accede to any form of congressional oversight, one has to wonder which hypothetical red dot or yellow smear might persuade them that, um, crimes. Perhaps some belief in Trump’s infamous boast that he could stand in the middle of Fifth Avenue and shoot a man without losing support has spooked Democrats to the point of paralysis. The reality is that Democrats on the Hill know what criminal obstruction looks like—they are just too terrified to say so.

The other problem with Democratic pointillism is that House Democrats want to look like measured and rational adults in the face of the biggest toddler tantrum ever witnessed in presidential history, one in which the Constitution is being repurposed as a diaper. But as any parent or even uncertified Red Cross babysitter will tell you, every time you decline to impose consequences, you move the line for acceptable behavior a little further. Mueller is himself trying to look measured and rational by demurring from testifying. Looking adult and rational in the face of abject insanity is not always synonymous with bravery, especially when the other side is shouting TREASON and LOCK THEM UP and INVESTIGATE THE INVESTIGATORS.

Our government is a joke.

“the prisoner of his own impulse”

His poll numbers were plummeting. His FBI director was decrying the dysfunction. The nation’s air travel was in chaos. Federal workers were lining up at food banks. Economic growth was at risk of flatlining, and even some Republican senators were in open revolt.

So on Friday, the 35th day of a government shutdown that he said he was proud to instigate, President Trump finally folded. After vowing for weeks that he would keep the government closed unless he secured billions in funding for his promised border wall, Trump agreed to reopen it.

Trump’s capitulation to Democrats marked a humiliating low point in a polarizing presidency and sparked an immediate backlash among some conservative allies, who cast him as a wimp.

Elected as a self-proclaimed master dealmaker and business wizard who would bend Washington to his will and stand firm on his campaign promises — chief among them the wall — Trump risks being exposed as ineffective.

“He was the prisoner of his own impulse and it turned into a catastrophe for him,” said David Axelrod, who was a White House adviser to President Barack Obama. “The House of Representatives has power and authority — and now a speaker who knows how to use it — so that has to become part of his calculation or he’ll get embarrassed again.”

The dog learns to heel.

A solid piece of investigative journalism from The New York Times on the “self-made” empire of Donald Trump:

President Trump participated in dubious tax schemes during the 1990s, including instances of outright fraud, that greatly increased the fortune he received from his parents, an investigation by The New York Times has found.

Mr. Trump won the presidency proclaiming himself a self-made billionaire, and he has long insisted that his father, the legendary New York City builder Fred C. Trump, provided almost no financial help.

But The Times’s investigation, based on a vast trove of confidential tax returns and financial records, reveals that Mr. Trump received the equivalent today of at least $413 million from his father’s real estate empire, starting when he was a toddler and continuing to this day.

Just another reminder that Donald Trump is a liar and a thief.

“The result is a two-track presidency.”

The New York Times published an anonymous Op-Ed essay by a senior member of the Trump administration, something they’ve never done before:

The root of the problem is the president’s amorality. Anyone who works with him knows he is not moored to any discernible first principles that guide his decision making.

Although he was elected as a Republican, the president shows little affinity for ideals long espoused by conservatives: free minds, free markets and free people. At best, he has invoked these ideals in scripted settings. At worst, he has attacked them outright.

In addition to his mass-marketing of the notion that the press is the “enemy of the people,” President Trump’s impulses are generally anti-trade and anti-democratic.

“This is 40 years of deceit coming home to torment him.”

Res, meanwhile, was the Trump Tower construction manager. A few years after that, working to refurbish the Plaza Hotel after Trump paid far too much for it, she up and quit—unwilling any longer to take Trump’s explosive moods and turbulent treatment. In her 2013 book, All Alone on the 68th Floor, she recounted an especially unnerving experience as she installed some cut-rate marble. “Donald took one look at this marble and started screaming at me,” she wrote. “He was shaking. ‘You did this,’ he said. ‘You bought this cheap shit and now you are making me look like a jerk. You’re no fucking good.’ I said, ‘Look, Donald, this is the marble you approved. It was cheap, you wanted to save money. Don’t blame me.’ It was like pouring gasoline on a fire. His face was red. His mouth was all twisted and I thought to myself, if he hits you, just take a fall. I did think he was going to hit me.” Res has been a steady Trump critic since he announced his presidential candidacy. Trump once responded by calling her “nasty.”

It’s seems Trump has been running a loyalty Ponzi scheme his whole life, burning bridges and firing people and then moving on and finding new people who are ‘the best’.

He’s reaching the end of the line of people willing to be loyal to him.

When Bloomberg asked 89-year-old Milton Glaser, along with 7 other designers, to design a logo for Trump’s proposed ‘Space Force’ he didn’t disappoint: 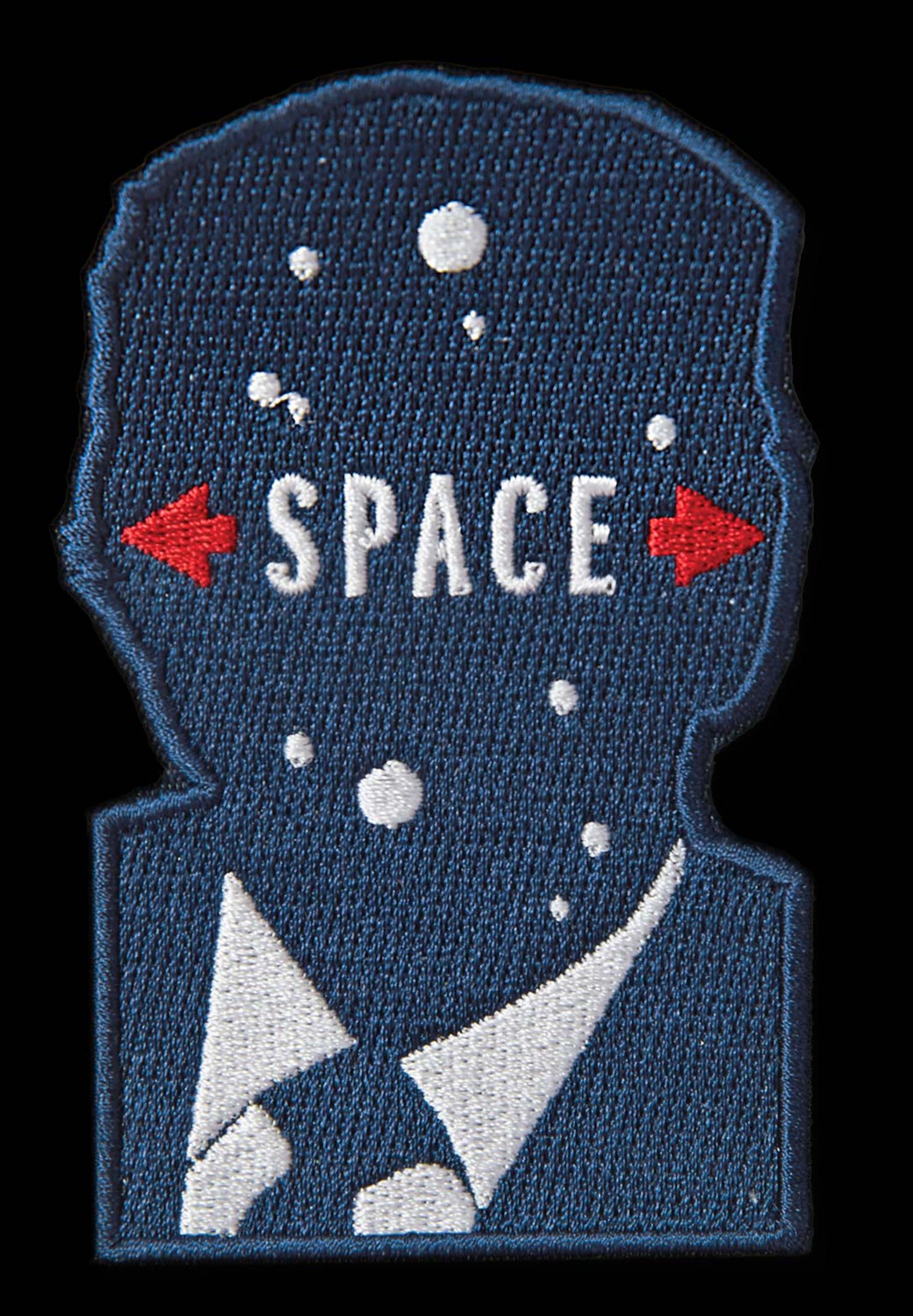 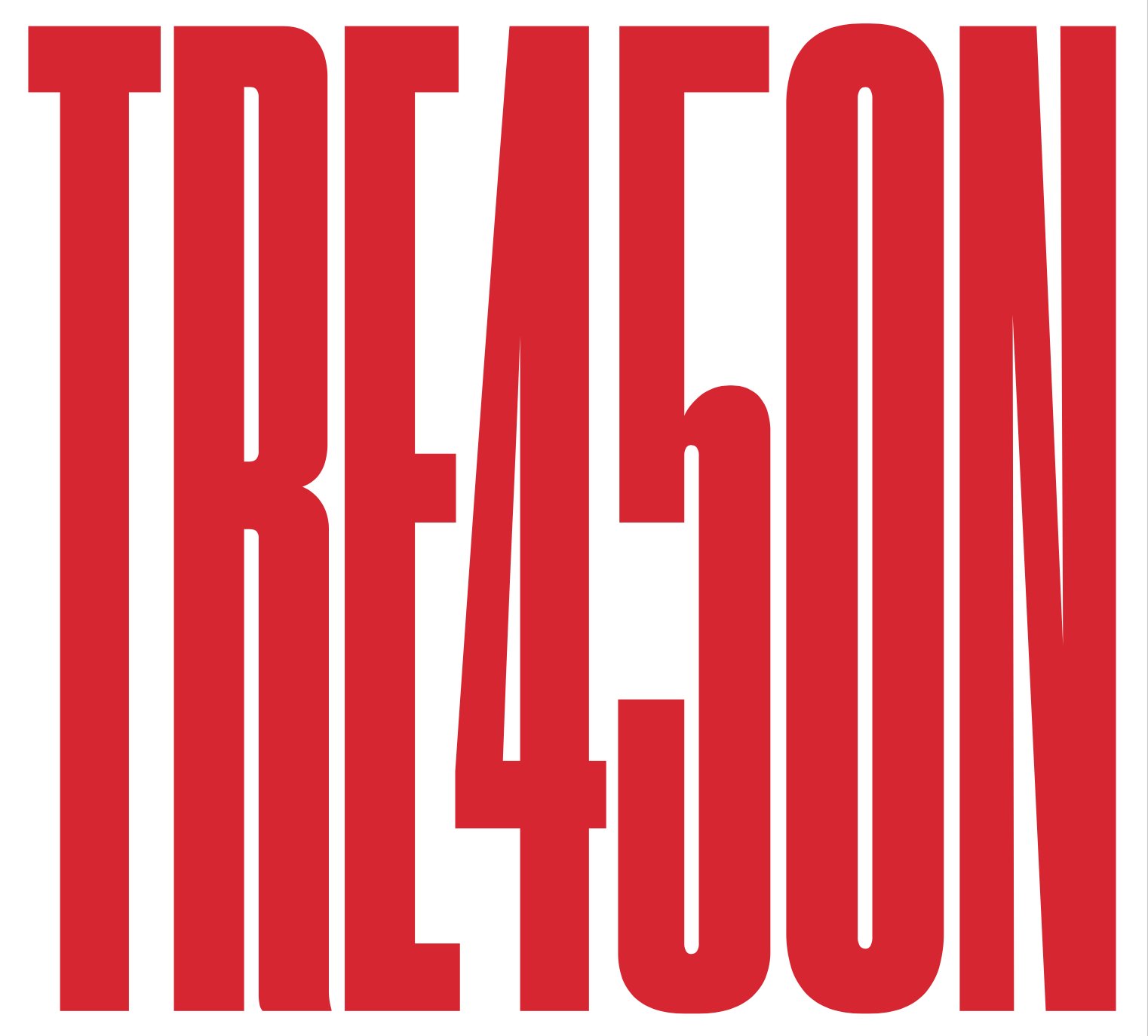 Russia’s got the clearance to run the interference.

The 11-count indictment includes charges of conspiracy by the Russian intelligence officials against the United States, money laundering and attempts to break into state boards of elections and other government agencies.

The indictment is part of the special counsel’s investigation into Russia’s interference in the 2016 presidential campaign.

Where there’s smoke, there’s fire. It’s become increasingly obvious over the last 2 years Russians have been interfering in American politics for quite some time. The Mueller investigation is just further confirmation.

A good trick I learned when listening to Trump is just think of the opposite of what he says to know what’s really going on. If he says the Mueller investigation is a witch hunt, it’s not a witch hunt. If he says Putin is a strong leader, he’s really a scumbag. If he claims he didn’t criticize British prime minister Theresa May yesterday, he did criticize her.

“the white freedom of Calabasas”

From a powerful piece by Ta-Nehisi Coates on Kayne West:

What Kanye West seeks is what Michael Jackson sought—liberation from the dictates of that we. In his visit with West, the rapper T.I. was stunned to find that West, despite his endorsement of Trump, had never heard of the travel ban. “He don’t know the things that we know because he’s removed himself from society to a point where it don’t reach him,” T.I. said. West calls his struggle the right to be a “free thinker,” and he is, indeed, championing a kind of freedom—a white freedom, freedom without consequence, freedom without criticism, freedom to be proud and ignorant; freedom to profit off a people in one moment and abandon them in the next; a Stand Your Ground freedom, freedom without responsibility, without hard memory; a Monticello without slavery, a Confederate freedom, the freedom of John C. Calhoun, not the freedom of Harriet Tubman, which calls you to risk your own; not the freedom of Nat Turner, which calls you to give even more, but a conqueror’s freedom, freedom of the strong built on antipathy or indifference to the weak, the freedom of rape buttons, pussy grabbers, and fuck you anyway, bitch; freedom of oil and invisible wars, the freedom of suburbs drawn with red lines, the white freedom of Calabasas.

This essay is a response to West’s recent tweets endorsing of Trump, calling Trump ‘his brother.’