Samsung hasn’t just copied Apple’s product design once, they’ve done it repeatedly for over a decade now. At least they’re consistent. Today’s announcement of the new Galaxy Fit is no different.

A quick look at their product renderings shows they’re not only ripping off Apple’s watch face aesthetic, but the Nike+ design style too. 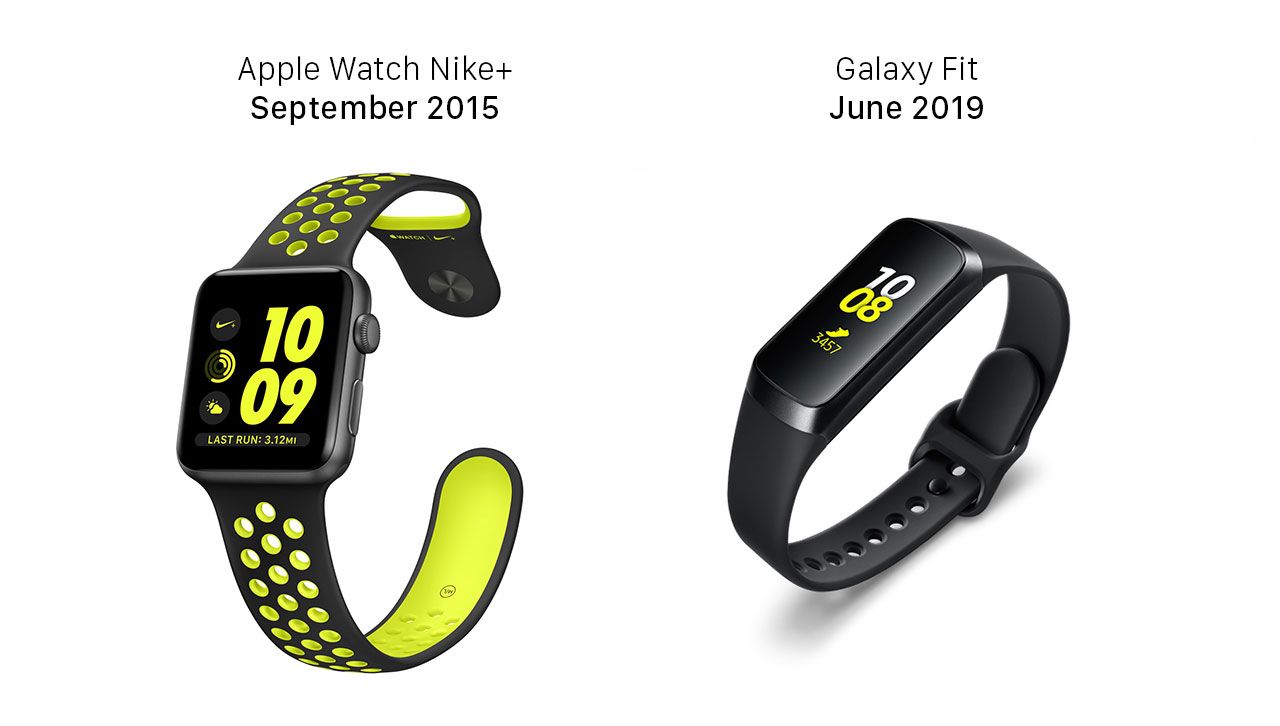 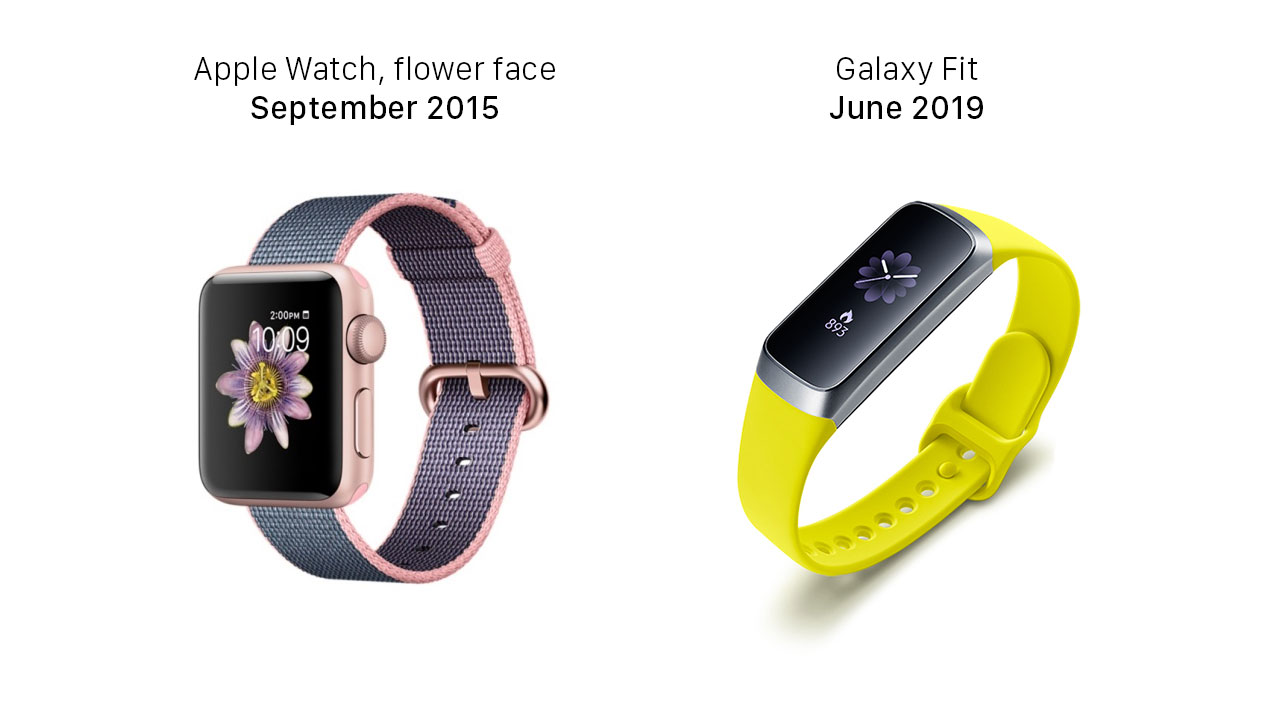 Can you make it Flavor Flav size?

Ok, that smartwatch represents neither ambition nor compromise, that’s called shitty design. It looks like something a freshman year product design student would turn in for their first assignment.

You’re not convinced yet? Check out this tweet from Avi Greengart showing the flapping watch hands in action. That’s straight up hilarious.

After a series of reported delays and developmental challenges, Fitbit is finally ready to unveil its first smartwatch. The timing is appropriate, given that this is the tenth anniversary of the company’s first tracker. The Ionic is Fitbit’s most modern device to date, featuring a colorful LCD touchscreen and advanced sensors. It also serves as the launchpad for some new Fitbit services, like a fully fledged operating system called FitbitOS, contactless payment and a subscription-based custom workout guide called Fitbit Coach. The company needs the Fitbit Ionic to be successful — its sales have slowed in recent months, and it faces a lawsuit over its use of haptic feedback. Judging from the few days I’ve had an early version of the Ionic, it appears to have the potential to resuscitate Fitbit’s waning business.

Fitbit’s smartwatch is absolutely horrendous looking. I can’t imagine any man or woman with even the slightest bit of fashion or design sense would want to wear it.

If Apple had created this watch they’d be torn apart by the tech press (and rightfully so), but since this is Fitbit, they get an A for effort. How cute.

A Cadillac for Your Wrist

LG needs to hire some people with experience in fashion, because their new watch is an ugly monster.

Product review grading on a curve

Gadget reviews are broken on the big tech sites like The Verge, and Engadget. They’ve actually been broken for a long time. If you read the long form part of the reviews and then you see the ‘grade’ they give the devices, they don’t match up.

Samsung’s smartwatch formula, and the company threw in every feature it could think of. That rationale is Samsung through and through, and it makes the Gear S3 worthy of your consideration, even if now might not be the best time to buy a smartwatch.

So throwing every feature you can think of into a device is good user experience? Is this what makes people love their gadgets?

With the Gear S3 Frontier, Samsung did a commendable job building a wearable with a little something for everyone. The device still falls short in a lot of ways, including its overzealous automatic fitness tracking and a limited app selection, even after a year. Still, with so few truly interesting smartwatch options out there, the Gear S3 can’t help but feel like a refreshing change of pace. If you’re in the market for a high-end wearable, the S3 is worth considering. Just remember: Android Wear 2.0 is coming early next year, so waiting for the next crop of watches is probably the smartest move.

Commendable is code for: “Nice try, kids, but not good enough.”

This review concludes the Samsung Gear S3 Frontier falls short in a lot of ways, has inaccurate fitness tracking, but since there aren’t any great Android smartwatches on the market this shitty smartwatch seems like a decent smartwatch and they give it a score of 80 of out 100.

How does a product that “falls short in a lot of ways” get a score of 80?

Velazco essentially graded the Frontier on a curve, with all the bad Android smartwatches raising the average for poor performers.

Sales of the Apple Watch to consumers set a record during the first week of holiday shopping, and the current quarter is on track to be the best ever for the product, Apple Inc Chief Executive Tim Cook told Reuters.

Responding to an email from Reuters, Cook said the gadget’s sell-through – a measure of how many units are sold to consumers, rather than simply stocked on retailers’ shelves – reached a new high.

Cook’s comments followed a report on Monday from technology research firm IDC estimating that the tech giant sold 1.1 million units of the Apple Watch during the third quarter of 2016, down 71 percent from the year-ago quarter. The comments offer a glimpse of the gadget’s performance during the holiday quarter, which is typically Apple’s strongest.

Cook is doing that shady thing Amazon does when it reports the number of Kindles it has sold: it doesn’t give numbers (go ahead and try to find anywhere on the Internet where Amazon mentions how many devices they’ve sold).

The Apple Watch is probably selling well, considering what’s happening with their compeition: Moto is taking a break from making new watches, the Microsoft Band is dead, and who knows whats going on with Samsung. Then again, maybe they’re not selling well.

One problem may be that the growth of the Apple Watch is slow and steady, and not at the enormous the iPhone is at, and thus looks shitty by comparison.

I like my Apple Watch and I think it’s a good device, but you can’t expect everyone to drop over $350 on an Apple Watch right after they dropped $800 on an iPhone.

The Apple Watch is a parasitic device, meaning it needs an iPhone to function. The iPhone used to be the same, where you couldn’t use it unless you had a Mac or PC to sync it with. Now, of course, you can buy an iPhone, back it up to iCloud, and never sync it with another computer. I bet the Apple Watch will eventually get to that point too.

Back to my main point: MONEY. These devices: iPads, iPhones, MacBooks, Watches, they all cost money and unless the price point comes way down on these things (which I don’t see happening), people aren’t going to be rushing out to get new ones every year. 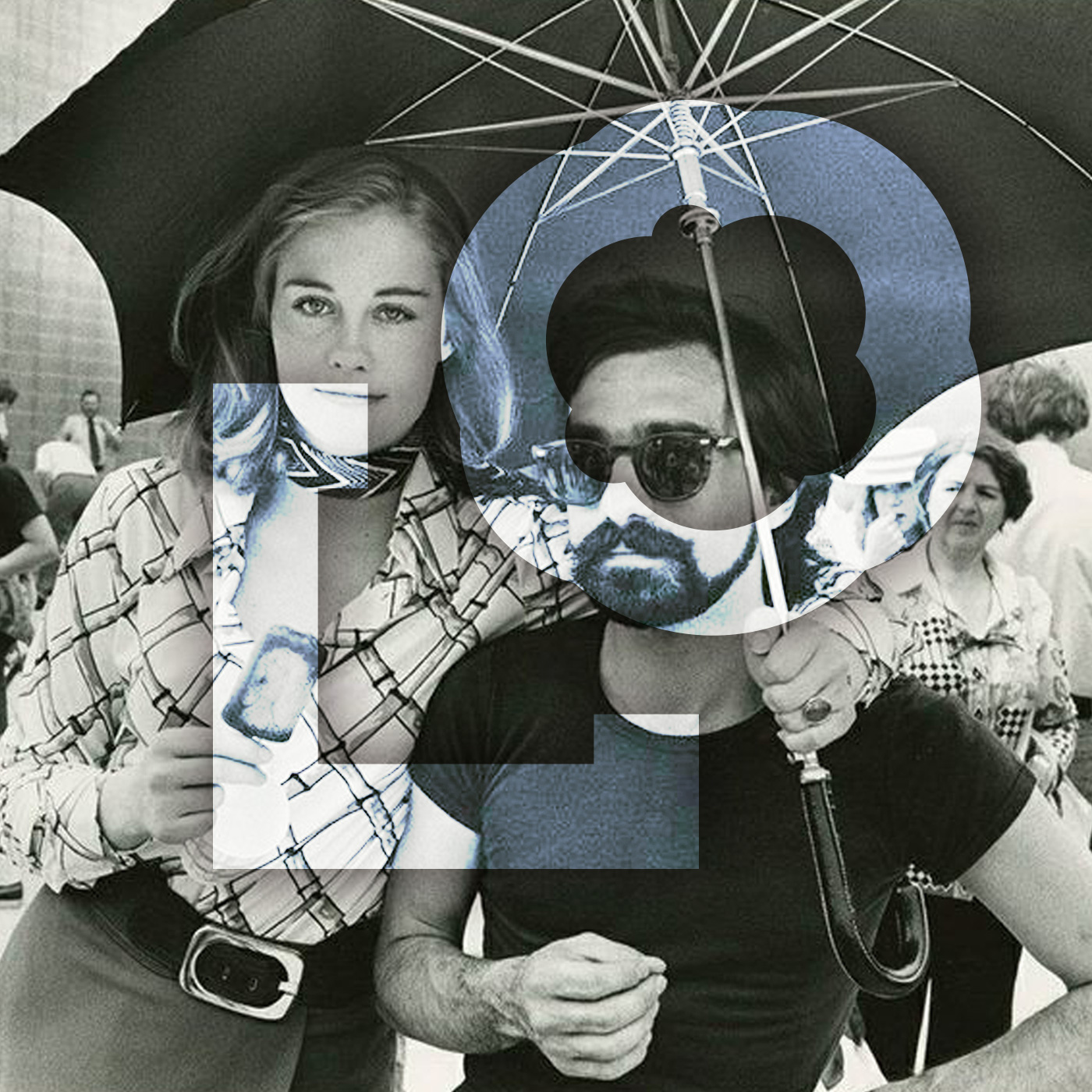 IDC: Smartwatch shipments fall for the first time; Apple only company in top 5 to decline:

The smartwatch market has hit its first bump, and it’s all Apple’s fault. Vendors shipped a total of 3.5 million smartphones worldwide last quarter. This Q2 2016 figure is down 32 percent from the 5.1 million units shipped in Q2 2016, marking the first decline on record.

It should be noted Apple has 47 percent of the smartwatch market, with Samsung a distant second with 16 percent. Also note Microsoft’s marketshare is so small it isn’t even on the list yet.

I’ve got my eyes on an the next Watch I expect Apple to announce this September/October. The original Watch was released April 2015.

It’s time for an update.

The latest data from Strategy Analytics reveals that the Apple Watch remained the most popular smartwatch through the fourth quarter of 2015, capturing 63 percent global market share based on an estimated 5.1 million sales in the three-month period.

Samsung trailed in second place with 16 percent market share and an estimated 1.3 million sales. Apple and Samsung together accounted for 8 in 10 of all smartwatches shipped worldwide during last year’s holiday shopping season, based on the data.

Hey Swiss watch maker guys, keep not being worried about the Apple Watch.

Maybe just cover your eyes and plug your ears. Pretend it’s all a bad dream.

Despite a $20 million Kickstarter campaign, Pebble is in trouble?

The company, which recently raised $20 million in a wildly successful Kickstarter, currently has 150 employees and is still hiring. Even with the crowdfunding infusion – which amounts to about $18 million after fees – the company is shopping for VC money in order to maintain growth and turned to a bank loan “in order to stay afloat.”

These start-ups that need continual injections of money sound more like junkies than legitimate companies.

“I promise man, this is the last time I’m going to ask you for money… I’m cool, I’m cool. Vegas cleaned me out, but I’m a new man now.” 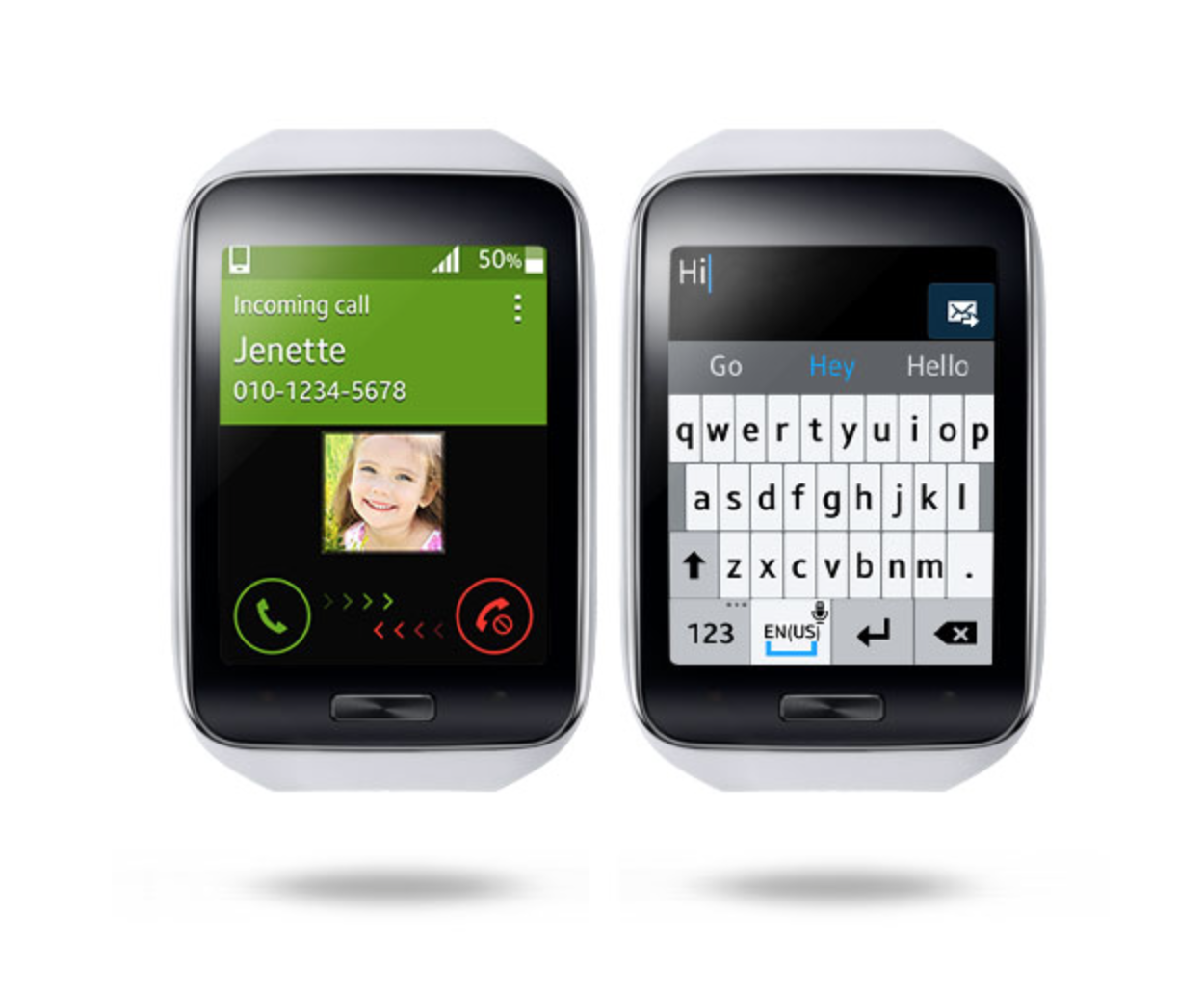 If it isn’t clear from that official product shot, that is a smartwatch.

I feel like John Stewart making fun of the news.

Poking fun of Samsung is too easy.