Of course Microsoft would release the least sexy earbuds of all time: 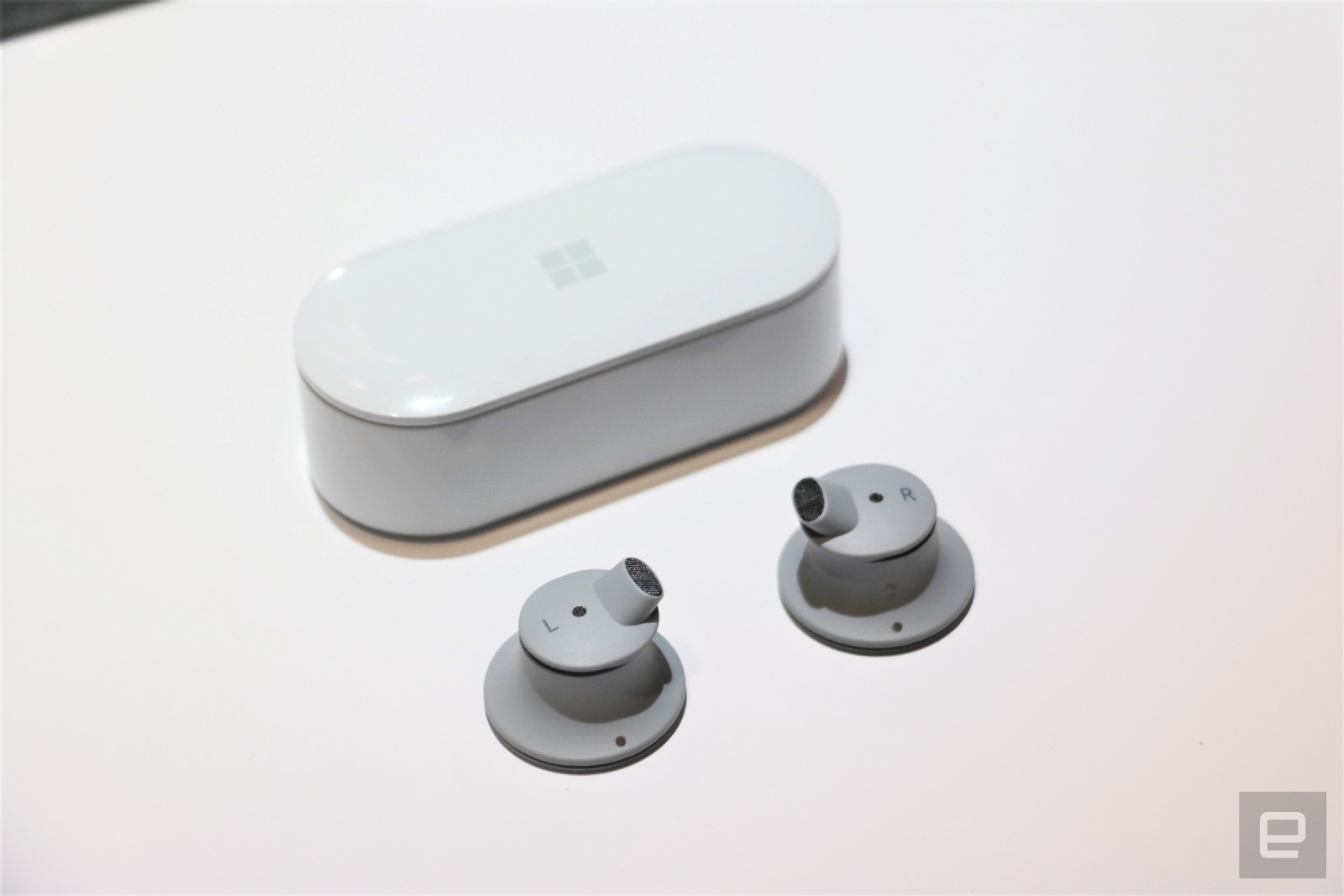 You could say Microsoft has evolved over the last 40 years. Partilcularly within the last 8 years with the introduction of their Surface tablet, yet underlying all their facelifts and capped teeth, they’re still the company Steve Jobs accurately described as having absolutely no taste.

She was interviewed by The New York times and a few ironic nuggets caught my eye:

Ms. Brennan-Jobs has a husband, Bill, a longtime Microsoft employee now launching a software start-up. He has two daughters, aged 10 and 12, and he and Ms. Brennan-Jobs have a 4-month-old son. As she drinks her juice, Bill is nearby with the children, and there’s an easygoing energy in the house.

A husband who worked for Microsoft for many years. How cute.

Ultimately, Mr. Jobs left his daughter an inheritance in the millions — the same amount as his other children — and she is not involved in the allocation of his financial legacy. If she was in charge of his billions, she says, she would give it away to the Bill and Melinda Gates Foundation — a curious twist given her father’s epic rivalry with Apple’s archnemesis.

It was another uncomfortable reminder that even though “Small Fry” is Ms. Brennan-Jobs’s story — one written in a precise, literary style — her father’s myth looms so large that she cannot control how her words are received. When choosing a narrator for the audio version, she nixed the ones who spoke his lines too harshly or without humor.

So much of Ms. Brennan-Jobs’s effort with the memoir seems to be to show how brutal Steve Jobs could be — and, in doing so, to reclaim that brutality for herself. And how she wants to reclaim it is to love it.

Lisa shouldn’t feel any guilt if Steve comes across as a prick in her book.

I’ve read Walter Isaacson’s biography of Steve Jobs, numerous personal anecdotes of people who worked with him, and watched many videos of him both on and off stage. He was an eccentric asshole, to say the least.

Of course that’s just one dimension of him. An important dimension, but one of many.

From The Verge, Web apps are only getting better:

So, what is a Progressive Web App?

Well, for starters, it’s just a website with a special “manifest” file that defines the name of the app, the icon for the home screen, and whether or not the app should show the typical browser UI or just take over the full screen. Users can add any website with a manifest file to their home screen or their Start menu and launch it like a regular mobile or desktop app.

But instead of just loading a website from the internet, a Progressive Web App is typically cached on your device so it has some sort of offline functionality. That could be anything ranging from saving the JavaScript and CSS so the website simply loads faster, on up to saving everything the user does locally like a traditional app.

Progressive Web Apps, importantly, can also support push notifications and other background work due to a new web technology called “service workers.” Service workers can help cache new content and synchronize local changes to a remote server, which keeps Progressive Web Apps as up-to-date as a typical website, while staying as responsive as a native app.

Right now the best example of a Progressive Web App is the Twitter Lite client. It’s fast, minimal, and even has a toggle so you can minimize data usage. Some online stores and publications have also taken advantage of the snappy performance of PWAs. I’ve actually been playing a minimal 2048 clone PWA on my iPhone for the last week. It works offline and remembers my high score between sessions. Sometimes it even saves the game state so I can resume a long run, but it’s not perfect.

In 2007, before the introduction of the App Store for iOS (then iPhone OS), Steve Jobs promised developers the power of writing web apps for iPhone. Developers didn’t buy it. Fast forward 11 years to now and I still don’t think many are buying it.

I’m happy web apps are getting better but native apps still have the upper hand.

Gutters are for pussies.

Apple’s new flagship retail store in Chicago, the one with a MacBook-shaped rooftop, is nothing short of an architectural marvel. At least, that’s how some news reports put it when the store opened back in October. Beyond standing out among the less inspired buildings of the downtown Chicago area, the new Apple Store also happens to be very poorly thought through considering its thin roof now has dangerous icicles hanging perilously over public walkways.

The deadly ice daggers have forced the closure of those spaces, as pointed out by local blogger Matt Maldre and reblogged by Daring Fireball’s John Gruber. As Maldre explains, the fancy building design, while seemingly in service of Apple’s new “town square” ideal for its retail stores, doesn’t seem to have been designed for the actual city it’s located in. “Maybe next time Apple will consider the actual community where their stores are built,” Maldre writes. “Y’know, basic things like in Chicago, the weather gets cold. It snows. The snow falls off the roof. Don’t design a slopping roof where the snow can’t be caught or guttered off somewhere.”

This article brings to mind a great quote from Steve Jobs, “Design is not just what it looks like and feels like. Design is how it works.”

It also brings to mind another quote from Jobs, “Gutters are for pussies.”

Alright, I made up that last one.

“These are not three separate devices. This is one device! And we are calling it iPhone.”

It’s a great episode and it’s also a sobering reminder of how primitive, crude and buggy the original iPhone was. It launched on AT&T’s shitty EDGE network (pre 3G), couldn’t record video, didn’t have multi-tasking, didn’t have Siri, and didn’t have GPS, to name just a few things we take for granted in 2017.

Over at The New York Times, Moshe Bar on the benefits of a clear mind:

Recently, I discovered how much we overlook, not just about the world, but also about the full potential of our inner life, when our mind is cluttered. In a study published in this month’s Psychological Science, the graduate student Shira Baror and I demonstrate that the capacity for original and creative thinking is markedly stymied by stray thoughts, obsessive ruminations and other forms of “mental load.” Many psychologists assume that the mind, left to its own devices, is inclined to follow a well-worn path of familiar associations. But our findings suggest that innovative thinking, not routine ideation, is our default cognitive mode when our minds are clear.

I always love the stories about how Steve Jobs would go on walks a lot, either to negotiate deals with other people or just by himself.

I do it a lot myself here in San Francisco, but I think the habit got formed in my 10+ years living in Manhattan because in New York, you have to walk everywhere (why wouldn’t you want to?).

It’s amazing the ideas that pop in my head when I’m walking. If you don’t do it, you should give it a try.

Elon Musk with the smack talk to the German press:

In response to claims that Apple is poaching key members of Tesla staff to work on its long-rumoured self-driving car project, Musk joked: “Important engineers? They have hired people we’ve fired. We always jokingly call Apple the Tesla Graveyard.” But just to make sure that his comments weren’t entirely dismissed as harmless CEO-style jostling, he added: “If you don’t make it at Tesla, you go work at Apple. I’m not kidding.”

I love the smack talk that happens at the top of the corporate food chain.

It reminds me of when Steve Jobs was on stage with Bill Gates at an AllThingsD Conference and compared iTunes on Windows, “like giving someone ice water in hell.”

That Jobs quote is from 2007. Given the confusing klusterfuck iTunes is right now in 2015, I hardly think of it as a glass of ice water. Even in 2007, iTunes was more like a glass of luke warm water.

Now look at me with the iTunes smack talk. Where did that come from?

I wasn’t planning that. 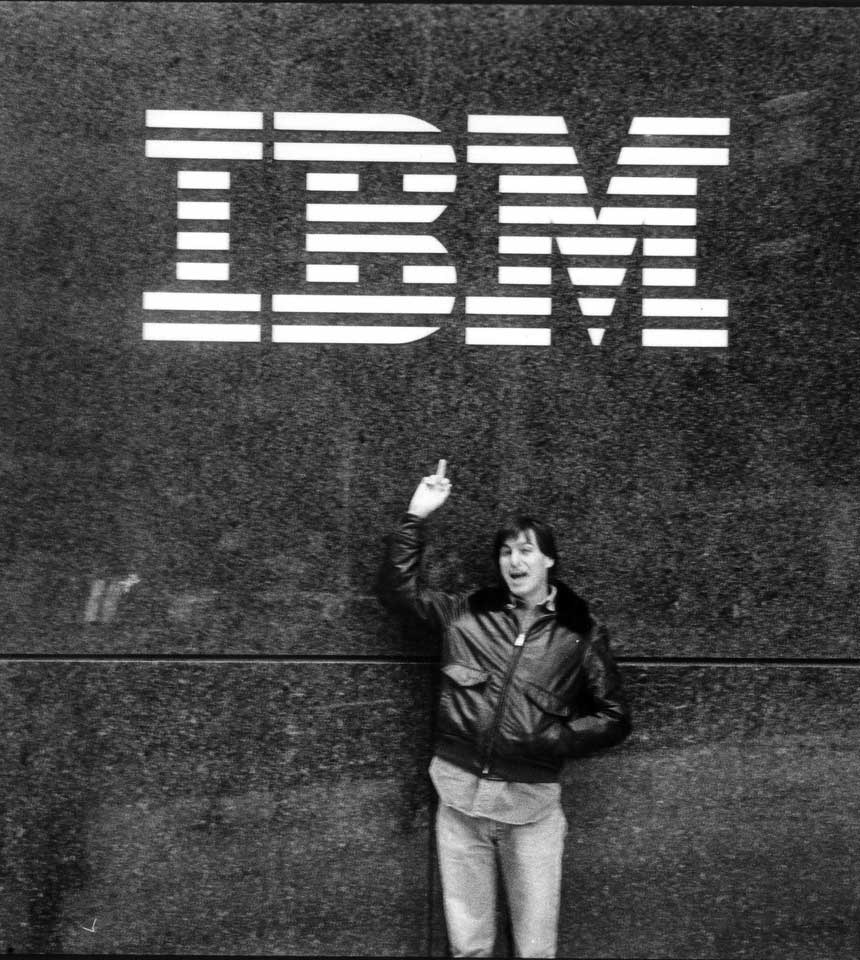 Microsoft, you can move forward with those layoffs. Keep up the innovation.

[For you kids who didn’t know, that guy in the picture is Steve Jobs, the founder and former CEO of Apple computer. He’s giving IBM a big fuck you.]

“…and this transformation is going to make some people uneasy. People from the PC world, like you and me. It’s going to make us uneasy because the PC has taken us a long ways. It’s brilliant. And we like to talk about the post-PC era but when it really started to happen I think it’s uncomfortable for a lot of people because it’s change and a lot of vested interested are going to change and it’s going to be different.”